Visit Ancient Egypt! It's here in California (plus secret giveaway) 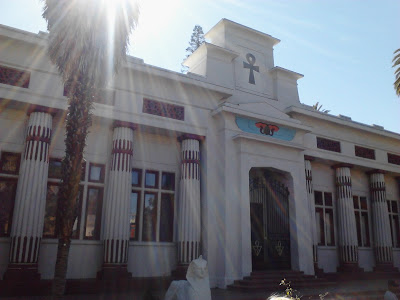 Yesterday we talked about Ben & Jerry's in Vermont, now we move to Ancient Egypt...in California.

The Rosicrucian Museum in San Jose has a stellar collection of ancient artifacts, including, yes, mummies, and even a wonderful walk-through replica tomb in the basement. The tomb's of such length (three rooms) that younger children will balk, but then feel proud of themselves--perhaps on the second visit!-- when they penetrate into the inner sanctum. The guided tours at the museum are fantastic, but I also recommend going into the tomb without others around, so you can almost convince yourself that it's all real.

Amazing factoid: This is the largest collection of Egyptian artifacts in Western North America. 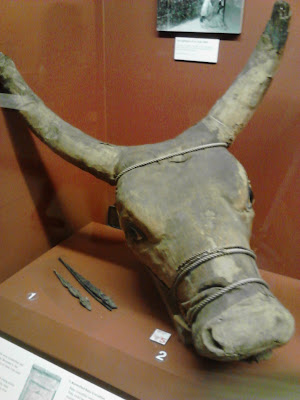 Extras: you can purchase a passport to stamp as you move through the exhibit halls.

The museum also offers a few short classes throughout the day. We sat down for a great one about cosmetics and perfumes. It's fascinating to know what Cleopatra did to smell great! She perfumed the sails of her boat so Mark Antony would fall in love with her before she even set foot on shore. We also learned how Nefertiti got those fabulous eyebrows.

Look at this sarcophagus of Disure, an 18th Dynasty priest and scribe. I guarantee you're going to scroll back up to look at it more closely after you read my text below the photograph. 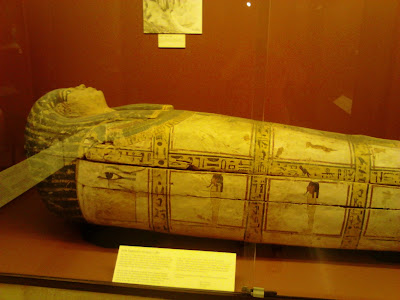 Notice the fully erect guy raring to go? Museums should organize an exhibit called Sex on the Sarcophagus and get Sarah Jessica Parker as a guest presenter.

I'll be kind and give you a close-up, you lascivious person! 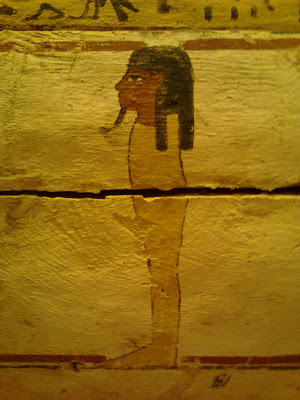 You can notice how the image appears scraped in that...er....area. According to the plaque, one of the presumably Victorian owners of the coffin was offended by the sexual nature of the image, tried to dig it out, and only succeeded in making it more prominent.

For Dan Brown fans, it may be interesting to know that the museum was founded by the Ancient Mystical Order Rosae Crucis (AMORC), a mystical society begun in the U.S. in 1915 but dating to ancient times with a connection to Freemasonry. There's no hard sell, or even soft, for the Order, just a small display in the entry hall.

A newer addition is a wonderful Alchemy exhibit. For those interested in the history of medicine (and magic!), this exhibit contains a mock medieval laboratory and several displayed manuscripts, including one that stretches out over eight feet. The Rosicrucian plans to turn this into a full-on museum, which will be the largest such collection in the world. Once up and running, this area will have alchemical workstations for up to 12 students. 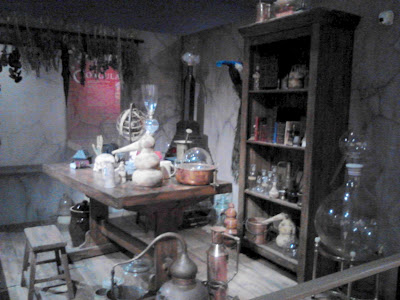 You can even sign 5-17 year olds up for the Junior Archeologist training program, which involves "behind the scenes training, hands-on learning opportunities, and the most fun graduation ceremony this side of the Nile!" It's free with any Friend of the Museum Family Membership.


Did I mention the planetarium? 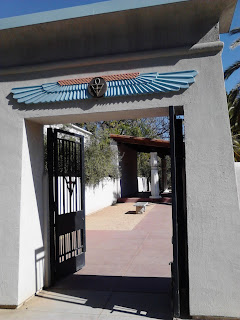 The gardens and placid walkways? 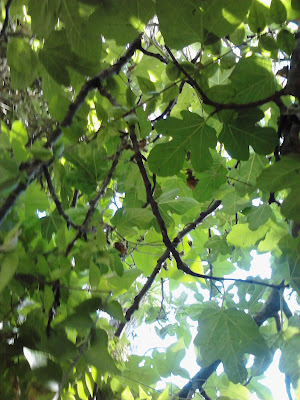 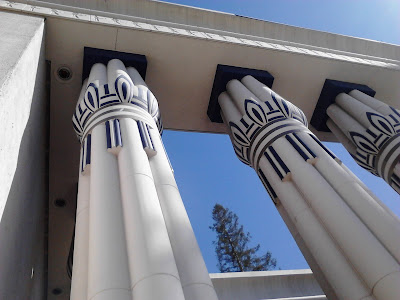 The chance to play the ancient game of Senet with game pieces writ large? 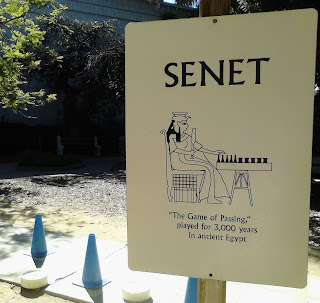 We enjoyed playing it so much I considered building a similar outsized Senet in our yard at home. 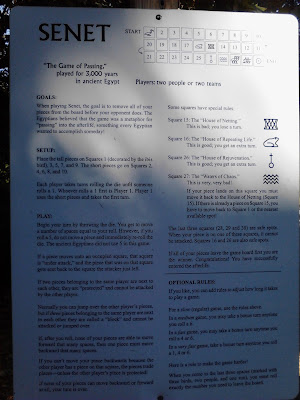 And perhaps best of all for beleaguered Bay Area parkers? The museum hosts a huge, free parking lot.

If you have an Egyptophile in your life, this museum is a must.

I'll end, as is always appropriate, with canopic jars. 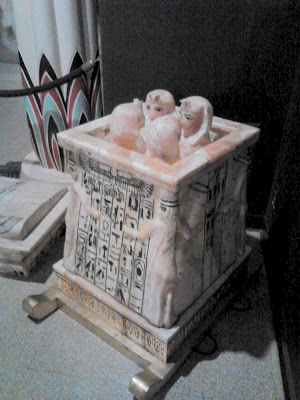 If these canopic jars look familiar, post in the comments below, and tell how you recognize them. I'll send a copy of my novel The Murderer's Maid (to anyone in the U.S.) selected randomly from the correct commenters!

Updated: a lot of people are visiting here but no one is making a guess! Here's a huge hint. Think of the biggest tomb discovery in history (it was memorialized in a Steve Martin song in the 1980s...the grave inhabitant's nickname is only three letters, spelled the same forwards as backwards, a palindrome... the nickname can also be repeated twice to be an old-fashioned, British scolding...)
. . . .
Posted by Erika M at Wednesday, January 03, 2018

I don't recognize the canopic jars, but enjoyed your blog! I had no idea there was such a fascinating museum in San Jose. Hugs, Claire

Could have won a Grammy but was buried in his jammies-King Tut!

Will have to see if my archeology loving friend and her husband (they met on a dig in Scotland, awww) have been to this museum.

King Tut! Buried in his jammies! Funky Tut! That does look alot like Tut's canoptic jar!

The winner was chosen by Random Number Generator (could've flipped a coin with two correct answers, but I did it the legit way...too legit to quit...) and the winner is...Corinne!
Congratulations!
I'll email you to get information on where to send the book.
Happy New Year.