Today I finally put fingers to keyboard and eked out six pages on a short story, just enough to bring to my writers group tonight (we're allowed a maximum of six double-spaced pages; I was typing right up until I left!) Right now I feel all sort of "between projects" -- but it's just better to keep writing. I do look forward to my five weeks in Hawaii and the ability to dedicate each day to working on a new book, whatever it will be (I have three ideas: one historical, one not, and one involves re-tackling my first-ever novel).

That first-ever novel is very badly written but has such a cool concept that I really want to try to do it justice. In fact, I tried for eight years to give it, uh, justice... the sheriff just wasn't in town apparently.

But I think writing two full-length novels (and a few other shorter projects) since then has helped me become a better writer. It'd be fun to test that theory.

They say every published novelist has six unpublished manuscripts under their bed... that's a very unpleasant number to contemplate. When you finish the first draft of your first novel, you're exhilarated! You think this is it! Editors across the globe are simultaneously drawing up contracts for you! It's time to figure out all the witty things you'll say in interviews! You must decide now whether you should smile or look mildly contemplative in your author photo! Ah yeah... and then ... years pass... cobwebs develop on the manuscript... and then eventually, with a sigh, you put it under the bed (in my case, the closet).

I spent eight years on that first book, rewriting, changing the ending probably five times (I mean how the book ended, not just the way it was written), changing the beginning, making some characters more malevolent, adding more supernatural hoodoo... I'm glad I was smart enough to stop working on it, because my next book sold. And so did the third one.

So that six books under the bed theory? I guess it applies to me if you consider that I should have written that many books in eight years rather than spinning my wheels on just one.
But I'm just idiotic enough to want to go back to it.

At the bottom of a dark Scottish lake 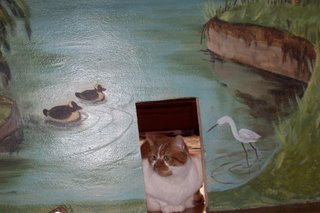 I just yesterday realized the synchronicity of the fact that I am reading White Oleander, about foster care, at the same time that we are hosting Boddington for five weeks.

Boddington is an amazing cat and we don't want to let him go. We've had him for five weeks while his mom was in Hawaii. And now she's back in Oakland. She wanted to come get him yesterday. The heartbreak began.

She'll be coming today to get him... and the little furry guy who would nestle under my chin to sleep, lodged against my neck, will be gone. The sound of scampering claws as he bats around one of my hair ties on the hard 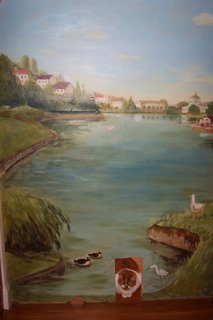 wood floor, and then races after it as it flies: gone. His idiosyncratic way of twisting his head upside down, as if the floor had fingers and would scratch his head: not to be seen by me any longer.

I'm sure Boddington would prefer to stay, given the top tier treatment we offer cats in this household. Ah, Boddington, I hardly knew ya!

(Here's Boddington emerging from the bottom of a "dark Scottish loch"-- the mural of Lake Merritt).
Posted by Erika M at Thursday, March 16, 2006 1 comment: 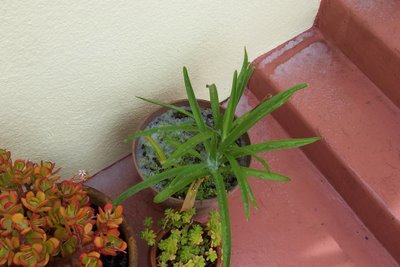 Before I left the house yesterday morning for my run, our visiting cat Boddington was on the windowsill basking in the sunlight. His fur was hot to the touch.

Halfway around the lake, it began to hail. Big white chunks that hurt my skin. I continued to run, watching the hail bounce on the ground like someone had dropped a bunch of very, very tiny ping pong balls. I muscled on, because running through hail makes you feel like an Olympian. But when it turned to rain a mile later, it was dreary.

After my run, it became hail again.

An hour later, I stepped back onto the porch and the hail still hadn’t melted.

Fast forward to the evening: big time thunder, which we almost never get here. Lightning too. We went through some weather extremes yesterday.

And now I know I am officially a grown-up, since I thought it was interesting to write about the weather.
Posted by Erika M at Sunday, March 12, 2006 1 comment:

My day in the hills has come to an end, I know 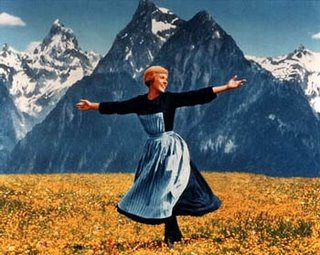 I am in ecstasy. Why? Because last night my German dance group began learning a very special dance, the Laendler.

This is the dance from the patio scene in The Sound of Music, where Maria dances with the Captain and they have some serious chemistry. I love that dance!
In the movie, Maria says that it's a traditional Austrian folk dance, but my dance leader says it's German. Nuns in training do lie.

It involves a Mazurka step which we were all sort of floundering with, but it is a pretty dance step if we can master it. We just learned the first half and will learn the second part two weeks from now, with the romantic "windows." I can't wait.

The only person that I know reads this blog on a regular basis is my oldest sister, and I'm sure she will be excited to hear we're learning this dance. We grew up in a musical household, with that sister playing piano for the vocal stylings of the Mailman Family Singers! The Family von Mailman! Another round of applause for the von Mailman Family Singers! (this joke makes sense if you remember the scene where the von Trapps win the contest). And we had a player piano with a fat piano roll of all the Sound of Music songs.

Maria von Trapp is very dear to us, because after the family climbed every mountain at the end of the movie, they came out on the other side and came to America, where they settled in... Vermont. My home state. They established a ski resort called the Trapp Family Lodge in Stowe. My mother said when she and dad first moved to Vermont, the family was still giving concerts, but by the time my oldest sister saw Maria on the street one time (by then, widowed, portly and apparently grumpy), she was not very enthused by her young fan.

We still loved her, though, and watched TSOM every year on TV, suffering through the endless commercials. For Xmas this year, one of my other sisters gave me a copy of the deluxe anniversary DVD. I can't wait to look at the bonus features. (And I want to watch the dance scene a few times).

So, Brenda, deep in the dark green shadows are voices that urge you to stay... so you pause and you wait and you listen... for one more sound, for one more lovely thing that the hills might say.
Posted by Erika M at Thursday, March 09, 2006 No comments:

Chico in a Day 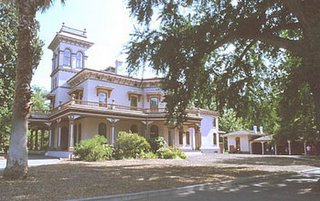 One thing Alan and I like to do to revive ourselves is to get away for a night. Sure, it’s great to get on an airplane for a week, but sometimes we’ll just throw a change of clothes in a gym bag and get in the car. That’s what happened recently, when we decided to hit Chico and were on the road within a few hours of the decision.

Why Chico? Alan wanted to see a concert of Kaki King, who was performing at Chico State that night. We left around 4 p.m., the concert was at 7:30, and Chico was three hours away. Cutting it a little close, wouldn’t you say?

Alan had heard Kaki on Prairie Home Companion and thought she was reminiscent of Michael Hedges. She performed that night with two other guitarists in an evening called La Guitara.

Afterwards, we bought one of her CDs and waited to have her sign it. The woman ahead of us in line had not been foresightful enough to take the plastic wrapping off her CD, so Kaki did it for her, breaking the jewel case in the process. Mystifyingly, she did not laugh or apologize or make any kind of comment. She was utterly silent through the signing process. Alan asked her, when it was his turn, “Will you please sign this for me?” Again, no response, not even to a direct question! No smile, not so much as a tic.

We stayed at a motel that I convinced myself was haunted, based on the very frightening sounds of a ghost peeing in the bathroom (thought it was Alan, but then I turned my head and he was still *** in *** bed***. Creepy!)

We visited the Bidwell Mansion, the highlight of our trip, where Mr. Bidwell of the 1800s refused to bribe people to become governor, and his wife was a suffragette.

We had an amazing breakfast at the Sin of Cortez (I thought the sin was how he treated the native peoples, but Alan says it’s coffee). Check out this hipster offering on the menu:

Bohemian Breakfast. Three eggs scrambled with scallions, roma tomatoes, jack cheese, with salsa, rosemary potatoes and your choice of a cigarette or a multi-vitamin.

We also trekked part of Bidwell Park, which reminded me of Canada for its barren winter trees and almost-Europeaness. The fast-flowing Chico Creek is apparently so clean that you can swim in it: one stretch is partially dammed to form a swimming area, with aqua-painted walls, stepladders for getting in and out, and white wooden lifeguard chairs. We were impressed.

Chico is charming. After our 20-hour visit, we turned around and drove home.