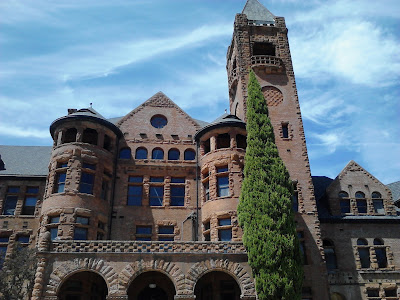 Officially termed the Preston School of Industry, Preston Castle is a boys' reform school established in 1894 in Ione, California. I had the good fortune to go tour it this weekend.

The first thing you notice upon entering is that this place is falling apart. At one point, the plan was to demolish the behemoth and its roof was taken off. Years of rain damaged the interior until a new roof was put on. It's on the National Register of Historic Places.


The wards of Preston were boys as young as 8 and as old as 16, we were told. They were there as juvenile delinquents, including for the "crime" of being homeless. The entire building radiates sadness. The site is really very remote and was likely more so at the turn of (that) century.

We were taken upstairs to the boys dormitory, where 50 beds once nestled close together. The ceiling is really quite extraordinary, with criss-crossed wooden beams. Boys had carved their names up there in the rafters. I wondered if the gorgeous ceiling must have been covered with a dropped ceiling back in the day, to make the room easier to heat or cool. As we left the room, a vintage photograph did indeed make it look like the ceiling was dropped and mundane.


We visited the staff dining room. I'm kind of in love with the asylum-green paint color there.


Next, we went to the infirmary. Very uncomfortable-looking metal bed frames and the hint of illness still circulating... 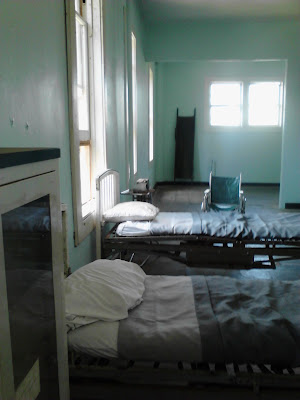 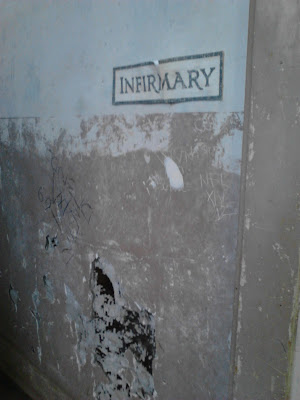 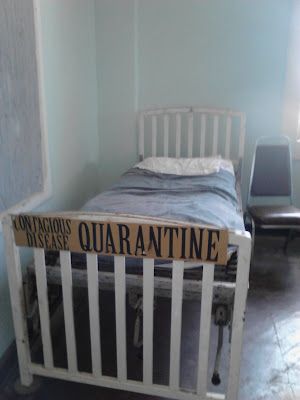 Next to it was the operating room. The docents have a clear sense of humor, as evidenced by the skeleton in the chair. I'm always sensitive about this stuff...but I don't think it was respectful. Scared boys shaped by tough circumstances came here for a chance to be clothed, sheltered, fed and instructed.

In the room where the skeleton pensively looks out the window, surgeries were performed on the floor. You've had enough time to think about the machine--post your guess in the comments?

I guess in some way I can't fault the impulse to position skeletons around; the place really does seem like a stereotypical Hollywood haunted reform school. And then we learned about the ghost.

We entered the kitchen, in which I immediately noticed the beautiful Hoosier cupboard. Apparently I am not a "sensitive" soul, because I was standing only feet away from where a violent murder occurred, and yet I didn't feel any echoes from that sad event.

We were told that the young cook came upon two boys in the kitchen, scolded them and told them to leave. As she went to climb the stairs up to her apartments, they pulled her back down and bludgeoned her to death. Or, well, the story goes that one of them did. He stood trial and benefited from a hung jury, in part because the other boy informant was known to be a big liar. The acquitted boy went on to later stand trial for two other murders.

The cook's body was stowed in a room off the kitchen, under the stairs.

So here's what's wierd. I tried to photograph the staircase she was pulled from. I couldn't. My cell phone's screen was black. I thought for a second the phone had turned off. I kept trying to get a picture of it, but blackness seemed to be seeping, exuding from the stairs. The best I could do was to capture the door frame of its entry. After the tour moved on, I remained, thinking that I could get a picture now that no one was standing in front of the room's window blocking the light. No. Still no light to illuminate that photograph. Here are my three tries:

I'll be the first to admit my cell cam is pretty crappy, but it was odd it just couldn't show me the steps. Now, the only reason I knew about Preston Castle was that I attended the book launch of Angelica Jackson, whose book Crow's Rest is in part set there. (I'm halfway through the book and totally, enthusiastically recommend it!) The night of our visit, I continued reading and came across mention of the main character's camera's failure to work properly at the castle. I got a little frisson of shock reading that.


Across from the kitchen is the plunge, adorned with coffins (sigh). A plunge is an old-time word for swimming pool, and my opinion is that that's what it is. However, we were told it was once filled with lye and was used to decontaminate new boys, even down to the chilling detail that a long stick would hold you under until you swam the entire length. I'm a little dubious about a huge vat of lye devoted merely to registering new boys.


In the basement was another dormitory, also said to hold 50 beds. When we heard the boys were housed in the basement, I felt a sharp disappointment that they would held in dank quarters when the whole structure was there for them! Yet the word basement was a bit misleading--it is really ground level, and there was actually a lot of windows and natural light flooding in. The door to freedom was the way boys exited when they aged out; a bus sat outside waiting to take them away. The superstition is that you can't ever look back, or you'll return for good. We learned the names of many notable wards of Preston, but the only one I remember or knew of beforehand was Merle Haggard. Apparently he doesn't talk about Preston. I'd like to read his autobiography.


Also in the cellar was the schoolroom. The chalkboard displayed more macabre humor.


In the schoolroom, I noticed slung netting covering portions of the ceiling. In that netting were some pretty big chunks of ceiling plaster. I'm glad the net was there to protect our heads. It wasn't until we exited the structure via the boys' dining hall that I looked back and saw this above the door: 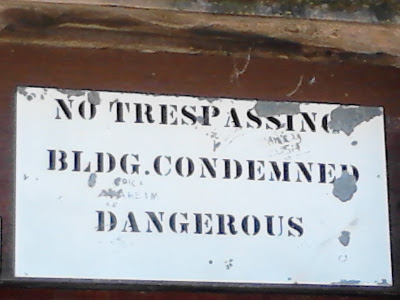 Well, so that gave me pause.


Out in the courtyard, we were shown a metal ring and told bad boys would be chained there and beaten. I didn't photograph it because if it was true, I'd be a ghoul. But I don't think it's true. We saw three more of those rings out in front of the castle. 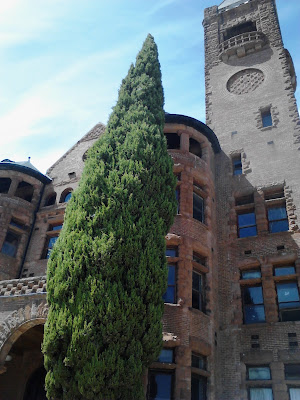 You'd like to think maybe this was a place of true rehabilitation, and that the boys were treated well and fed well. I'm fascinated and want to learn more. Preston closed in 1960, and so there are surely many boys still out there now men, with their stories.


. . . . .
P.S. Logging in the next day to say I hope I wasn't too hard on the docent and the volunteers that run Preston Castle. It's certainly worth discussion, the idea of how we talk about places where traumatic things happened. For instance, I was personally appalled to learn that the site of the Lizzie Borden murders is now a B&B... yet without its being preserved in such a way, the public wouldn't get a chance to go and look. What do you think? And I want to go on record as saying THANK YOU for the volunteers of the foundation who donate time and energy to keep Preston Castle open. It is a great gift.


Wendover airfield, a major WWII base in Utah, is now a historic site. The museum is well worth visiting, and the spirit of the place is hard to describe. You can almost hear the buzz and machinery of the past, whereas I literally didn't see another person there other than my own family.

Apparently Paul Tibbets, pilot of the Enola Gay, was given three bases to choose from, and he selected Wendover because of its remote location. It truly is far from anything, with horizon for miles, and much of it the Great Salt Desert (more on that in another post. It's very close to the Bonneville Salt Flats, now in the news because they can't hold their races there for the second year in a row, possibly because salt mining is depleting the resource and making the flats too slushy).

If these structures and empty hangars could talk, what tales they would tell....

More on Wendover in another post (and also see below). Stay tuned.