This last weekend at Sacramento's Capitol Book Festival was a great event. I enjoyed meeting authors and readers and reconnecting with a few folks from long ago. I noticed an interesting thread that went through several panels: the idea of a supernatural way in which a story presents itself to an author. Here's the rundown:

1. In my panel with Gini Grossenbacher and Kate Asche, an audience member asked about the word "muse" and how we see it operating in our work. I talked about my experience of not remembering writing entire pages of The Witch's Trinity, yet there they were on my computer so I must've written them. (Unless: elves?) I admit that there is a certain form of mystery around how stories and words funnel through our bodies and to our pens or keyboards. Toni Morrison has famously said that Beloved was channeled through her from the ancestors.

2. I then attended a historical fiction panel with Elizabeth Rosner and Bruce Holbert. They both were talking about how mysterious the process is, so I firmed up the deal by asking them outright during the Q&A if they believed there was something supernatural to it. They both agreed. Elizabeth said an old photograph of Steinmetz, the main character in her novel Electric City, appeared to be looking right at her, and she believes she was made to tell his story which has been lost to time.

3. Next was a panel with Cara Black, Rhys Bowen and Terry Shames. Cara talked about how she was loading her clothes dryer one day and a huge change just came to her; a voice spoke. It gave me chills--she literally heard a voice. [As a side note, I have to say I laughed heartily when Rhys Bowen reported coming to an unpleasant realization about a character and yelling at her computer for 10 minutes: "is she really French?"]

After this, I had to head home for childcare swap although there were many more things I wanted to see (and I was bummed that several panels were double-booked--including against mine--so I had to make some reluctant decisions about where to go and what to see.)

On Sunday, I returned kicking my heels up, without the responsibility of presenting. In fact, a volunteer asked me at the top of the escalator if I was an author and without thinking, I said, "No, just a participant." I hasten to say, I feel very grateful to have presented at this festival, which was magnificently orchestrated by Marion Englund, Kelli Hanniford, Fred Palmer and a field of incredible volunteers...it's just fun sometimes to go and not have to worry if I'm sweating. I circulated around the booths on the main festival floor and was impressed with all the offerings. I ran into friends Mark Wiederanders, Bethanie Humphreys, Christian Kiefer, Lois Ann Abraham and even Holly Brown for a millisecond in the hallway: old buddy from San Francisco Writers Group lo these many years ago! (I'm worried I'm missing someone...sorry if so!)

Then I attended a fantastic panel with Susan Spann and Jennifer Laam--they were great and had the crowd laughing.After that, at the Barnes & Noble booth we ran into Erin Lindsay McCabe, and we headed out for a historical novelist women writers (and reader: Erin had wonderful blogger friend Jennifer Wolfe with her) lunch nearby. I regret to say, I did not return to the festival and missed some more great presentations. But I was inspired by the whole weekend, and wanted to head to a cafe and do some writing before I returned home.

Suffice it to say, Sacramento has an incredible writing community (over 100 authors presented!) and I'm so glad to be a part of it. This was the inaugural Capitol Book Festival, and I can't wait to see what happens next year. 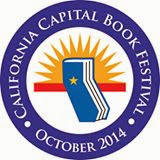 I'm delighted to be part of Sacramento's inaugural Capital Book Festival taking place this weekend. I'm going to be presenting on the all-inclusive topic, "Writing Your Book." Wow...I could cover a lot of ground with that!

Luckily, I'm presenting with two other authors to lessen the load: poet Kate Asche and young-adult author Gini Grossenbacher. Here's the link to my presentation and the link to the festival website. The festival is huge, with over one hundred authors! Who knew Sacramento had so many of us? I've just moved to the area a few years ago, so I'm excited to meet writers who are already part of the literary community and touch base with those I already know through the Historical Novels Society.

My presentation takes place this Saturday at noon in Room 305 of the Sacramento Convention Center. The entire weekend is free. There are events for kids as well...check it out!