Many thanks to blogger and writer Susan Spann, who just posted a very nice review of The Witch's Trinity on her site, www.susanspann.com.

I met her at the Historical Novels Society conference this year in San Diego. I had a great time sitting with her at dinner and talking shop. One cool thing about her (among many) is that she is required to drink about five cups of coffee a day. I thought it was great to have a medical dictate to freely imbibe! She was a lot of fun, and now she has written a really nice review of my book, on top of buying multiple copies of my book. Many thanks, Susan! 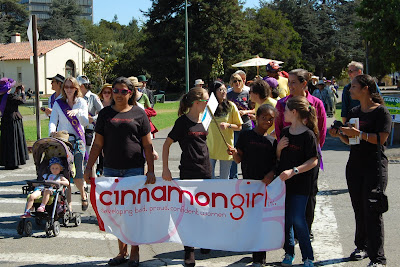 What a fine day we had, and how high were all the spirits! I loved wearing the purple "Votes For Women" sash and feeling like I was marching in the footsteps of my forebears (unfortunately, we were not able to recreate the exact path of the 1908 parade in Oakland, but close enough!)

Today, the 14th of October, is the 100th anniversary of the official tally for women getting the vote in California. HOORAY! (The polling date was the 10th, but back in 1911 it took four days for all the votes to be counted up and down the state--and in fact one of the reasons against woman's suffrage was the idea that it already took so long just to count MALE votes.)

Here's a photograph of me in my parade sash. I'm at far left, gesticulating, pushing a younger voter. I have many, many photos to post, but this will suffice for now. If you're a woman and you're not registered to vote, the ghosts of the past are shaking their fingers at you.