I wrote this piece for the Oakland Heritage Alliance newsletter. If you'd like to subscribe (it appears three times a year, and always has great articles about Oakland history), visit www.oaklandheritage.org. Membership is affordable, and the subscription comes with it.

Suffrage passed in California in 1911, nine years before it passed nationally. We can pat ourselves on the backs for being the sixth state to permit woman at the polls. Yet if not for the bullheadedness of an early governor, women could have been voting as early as 1893.

The villain? Governor Henry Harrison Markham, a Republican who served 1891-95.

Born in New York in 1840, he was educated at Wheeler Academy in Vermont. After graduation, he and his brothers moved to Wisconsin. There, he worked as a teacher before volunteering for a Wisconsin infantry regiment of the Union Army. He participated in Sherman’s famous march to the sea, including slogging through waist-deep swamp water, and sustained severe injuries at the Battle of Whippy.

After the war he returned to Wisconsin and studied law. In 1876, he married Mary Dana. They responded to a newspaper ad to buy 23 acres in Pasadena, in part to improve Henry’s ill health, and moved there with their young daughter in 1879.

Markham certainly sounds like a good guy: he volunteered for the school board and helped establish the local library. He was the first U.S. representative for California’s sixth congressional district, 1885-87, and won the campaign for governor thanks to his solid grip. “The victory was attributed partly to Henry’s manner of personally greeting thousands of voters who became well acquainted with the ‘Markham Glad-hand.’ It was his signature move—a firm, hearty handshake evoking sincerity,” wrote Lawrence P. Gooley. He took office in 1891.

In response to the state’s economic woes, he pushed for the 1894 Mid-Winter Exposition which indeed brought needed money and attention. Held in San Francisco’s Golden Gate Park for six months, the fair’s legacy is the original De Young Museum and the Japanese Tea Gardens.

A lovely anecdote about Markham shows his good heart. Out walking one day, he found a woman and child who had been evicted from their apartment. He secretly slipped a $100 bill into the keyhole and told the boy to go look again for the “key.” He left before his good deed was discovered.

All this makes it hard to conceive that this gentleman looked at the suffrage bill that had passed both the Senate and Assembly and summarily vetoed it.

Harder still to understand how he justified his decision to his wife and four daughters, Marie, Alice, Gertrude, and Hildreth. The family had no sons.

The discussion may actually have been easier than we might think, since it was doubtless conducted by mail, if at all. His fifth daughter Genevieve had died of typhoid fever six months after the family moved to Sacramento. Mary and the remaining daughters returned to Pasadena where they stayed until the end of his gubernatorial term three and a half years later.

It’s hard to enter the 1800s male mindset to determine why Governor Markham didn’t think that his closest circle deserved to vote. His wife had been formally educated at Rockford Seminary in Wisconsin (whose most famous graduate was Jane Addams, winner of the Nobel Prize), and was a tireless volunteer for her Pasadena church and its causes. He had been raised with five brothers and four sisters, so surely the female gender was not a cipher to him.

He loved his daughters. I found an article that talked about an elaborate playhouse he built for them, which is still extant and now sits in a corner of the yard of Pacific Oaks Children’s School in Pasadena.

Yet it’s said he felt suffrage was unconstitutional. Trying to locate more information than that is difficult, and in fact one of my sources indicates that the bill may not have been for blanket suffrage, but rather for “school-suffrage,” so that women might vote at any school election and hold office.

This appears to have been a tactic to chip away at public sentiment; men might be more likely to grant power in an arena viewed as female anyway, and then armed with that success, women could then lobby for more. By 1904, 19 states permitted school-suffrage (in addition to the four states then granting full suffrage: Colorado, Idaho, Utah and Wyoming), while in a few other states women might vote on municipal bonds or questions of public expenditure.

According to the 1904 World Almanac prepared for the Louisiana Purchase Exposition, other persons excluded from voting in California included “Chinese, idiots, insane, embezzlers of public moneys, convicted of infamous crime.” A footnote added, “Or a person unable to read the Constitution in English and to write his name.”

Markham did not run for a second term, and his grand three-story Pasadena mansion was torn down several decades after his 1923 death from stroke. His mansion had stood near today’s tourist mecca for Craftsman enthusiasts, the Greene & Green Gamble house, and homes owned by other titans of industry: Busch (beer), Wrigley (gum), Maxwell (coffee), Spalding (sporting goods) and others.

The issues around suffrage were complex, and not solely attributable to misogyny. As is endlessly the case with politics, financial interests played a huge role. Many feared women would promptly institute social reforms such as limiting hours that children might work, making factories and mills less profitable. They also predicted women would institute prohibition, not a farfetched fear since the Christian Women’s Temperance Movement was a stalwart suffrage crusader.

Indeed, when the issue of suffrage went (unsuccessfully) to a statewide referendum in 1896, the Liquor Dealers League urged its members, “See your neighbor in the same line of business as yourself, and have him be with you in this matter.” Still others felt suffrage would create an administrative nightmare: it already took nearly a week to count the male votes in the state.

Whatever Markham’s reasoning was, he set back the women’s movement in California by 18 years.

One final tidbit: my research yielded the fact that Gov. Markham has his own Facebook page, and six people like him. Hilarious!
Posted by Erika M at Wednesday, September 28, 2011 No comments:

I just stumbled across a suffrage piece by an old writers group friend, Elaine Elinson. She too is a Heyday author, and her nonfiction book Wherever There's a Fight: How Runaway Slaves, Suffragists, Immigrants, Strikers, and Poets Shaped Civil Liberties in California won a California book award.

She outlines here how Selina Solomons got San Franciscans to work for suffrage. She's a fantastic writer.
Posted by Erika M at Tuesday, September 27, 2011 No comments:

Friend Linda McCabe alerted me to this link, about the discovery of an 800-year-old corpse in Tuscany. Because seven nails were driven through her jaw, it's thought she was a witch, and this was a measure to keep her from rising from her grave. (But that seems spurious, as she was buried in consecrated ground.)

Thirteen nails were also found around her body, as if fastening her clothing to the ground. She was not in a coffin or shroud. Hm, seven and 13: both kind of "evil" numbers.

Another nearby corpse was buried with 17 dice. Seventeen is an unlucky number in Italian, and women were prevented from playing dice in medieval times, so it's thought she too may be a victim of a witchcraft accusation.

Stories like this are always such sad mysteries. Were the nails driven before or after death? What were these women's stories? And how would they feel knowing their images are posted on some worldwide device that everyone can access, and see the horrible truth of their skulls displaying the violence of their treatment? 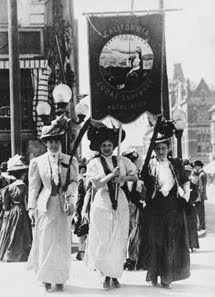 Something is brewing in Oakland that I'm so excited about!

Individuals and groups are coming together to re-enact a suffrage parade that took place in Oakland in 1908-the FIRST suffrage parade in California! Suffrage didn't pass for another three years, in 1911...but women fought hard for decades to get it through.

We want to honor those women who struggled so valiantly to get us the right we take for granted today. Can you imagine if women couldn't vote now?!! Yet only 100 years ago it was the case all across the country with the exception of four states: Idaho, Wyoming, Colorado and Utah.

The parade takes place Sunday, Oct. 2. Gather at the Lakeside Park bandstand, march up Grand Avenue to the pergola, and return through the park. It's free.

If you want to spend money, buy a $10 commemorative sash, or donate to help defray expenses for things like street closure permit and the requisite police officers to monitor the event. Visit this website to learn more and to get your sash/donate.

Here is a photo of the 1908 parade. In the background is the (now gone) Masonic Temple at 12th and Washington. The woman on the right is mother to the woman in the center, which makes my heart swell. I somewhere also came across a photo of a woman pushing her child in the stroller. Women working together across the generations: beautiful.