I’ve now read a few articles in Filmmaker Magazine that reference “interconnected rooms” on the set of the Borden house. That is so truly integral to the plot, both upstairs and downstairs.

In this piece, “Making a Film is Always a Chaotic Experience,” director Craig McNeill talks about the struggle to find an appropriate house, and concludes, “We found a house that, while different looking than the Borden home, did have several interconnected rooms which was a notable and unusual characteristic of the Borden residence.”

This article features cinematographer Noah Greenberg talking about wanting the film to be “visually elegant and ominous” with characters filmed at the edges of the shot, never centered. I found it to be a really fascinating article.  And Greenberg, too, mentioned the interconnecting rooms:

There were many scenes in Lizzie where we would move through, or see into, several interconnected rooms following a character. With a small lighting package and team and very limited time between setups it was challenge to balance/motivate the light consistently (at a useable stop) across these rooms while keying off practical sources such as a double wick candle held by an actor or an oil lamp on a side table.

All right. So why do those rooms need to flow into each other?

Downstairs: The sitting room where Mr. Borden was killed has doors leading into the front entry, the parlor, the dining room, and the kitchen. Four different ways to enter… and presumably its “fishbowl” type of layout means it would be difficult for a killer to murder him without someone in the house being aware. One of Lizzie’s alibis is that she was in the dining room ironing… well, that was mere feet away and it would simply impossible for such a noisy murder to take place so nearby without her being aware of it. I mean noisy in terms of what the hatchet did to his skull. Mr. Borden himself made no alarms because he was asleep when attacked.

Upstairs: the home upstairs is like a “shotgun shack”—you must walk into Lizzie’s bedroom to reach Emma’s and the parents. Although, famously, the door between Lizzie and the parents was nailed shut, and Andrew and Abby Borden used the servant’s stairs to access their chambers. The guest room where Abby was killed leads into Lizzie’s, although there was a desk blocking it.

The home was strange; there’s no doubt about it. It was originally intended as an apartment building, with full living quarters on the bottom and second floors. Andrew converted it to one unit when he took ownership. If you think about feng shui and the energy created by multiple doors flowing into a room and then being blocked, it creates a disturbing sense. Almost like Shirley’s Jackson’s Hill House, where the angles don’t exactly add up to 90 degrees.

It’s a disquieting house. Claustrophobic is the word that springs to my mind most often when I think about it. Small, cramped, enraging.

I’m disappointed the movie wasn’t shot at the real house. When I visited there last year, there was a photo on display of Chloe Sevigny sitting on Andrew’s sofa and there was great excitement about the upcoming movie (which premiered LAST NIGHT at Sundance!). We were told Chloe had a Lizzie Borden fascination and wanted to film the movie in situ, but because there is a federal building nearby, it created too much of a security hazard for Fall River to agree.

I’m dying to see the movie. I’d love to see how they used the rooms in the house they did locate, and am glad there was awareness of the importance of the rooms flowing into each other.

I fervently hope this movie gets a distribution deal so I can see it someday soon.


If you want to know more about this story, my novel was written from the maid's point of view--Bridget Sullivan was the only other person in the house the day of the murders, besides Lizzie and the victims. 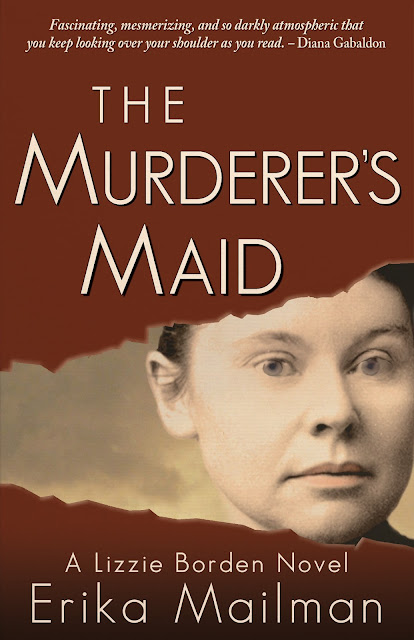