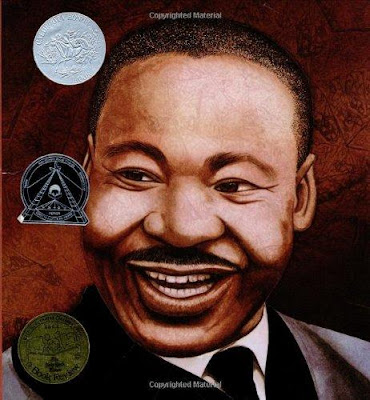 We have this picture book Martin's Big Words and it’s in our rotation year round. It’s so hard to talk about what King fought for without being honest about what he fought against, and it’s so hard to introduce children to the hateful reality of racism. Yet it must be done.

I remember in Francine Prose’s introduction to her book about Anne Frank, she talked about her loss of innocence: the first time she saw a photograph of Holocaust victims and understood that people had been murdered for who they were.

I’d love for my kids to remain in a blissful state where they don’t know about the ugliness in other people’s hearts, but we’re raising them to be good citizens who will stick up for others and do the right thing.

I'm white, and I can imagine that discussion must be a hundredfold harder for black families. How do you tell your child, "There are people in this world who think we are inferior because of the color of our skin?" It just seems incomprehensible.

This selection from King's "Letter from a Birmingham Jail" has long raised tears in my eyes and made me bewilderingly angry:

"...when you suddenly find your tongue twisted and your speech stammering as you seek to explain to your six year old daughter why she can't go to the public amusement park that has just been advertised on television, and see tears welling up in her eyes when she is told that Funtown is closed to colored children, and see ominous clouds of inferiority beginning to form in her little mental sky, and see her beginning to distort her personality by developing an unconscious bitterness toward white people; when you have to concoct an answer for a five year old son who is asking: 'Daddy, why do white people treat colored people so mean?' "

Have you too found it hard to talk about racism with young kids?

I remember once taking a picture book out of the library about slavery and then not wanting to explain to my kids what a slave was. I tried to frame it in terms of, "You're not going to believe it, but this crazy thing once happened in our country..." but then honor and duty compelled me to say, "...and guess what? There are still some people who have this hatred..."

Our local library is really good about ordering diverse picture books, books with people of color on the cover, books about people around the world.

I particularly like this "My Family" series, which features people of diverse ethnicities and sexualities:
http://bit.ly/2mDRVmT
It's about a boy with a camera who features a different kid at school in the newspaper each week, so he goes home with that kid and learns what that kid's life is like. The books are written by Claudia Harrington and illustrated by Zoe Persico.


Another great series were photograph books set in Ethiopia, such as New Shoes for Helen, which is about a girl who needs shoes for her aunt's wedding and where they go to try to find the perfect pair. And Deron Goes to Nursery School, which is self-explanatory. The author/photographer is Ifeoma Onyefulu.

Today and every day, let's honor a great man who was doing such good work to connect all people, and whose life was cut short. Can you imagine what he might've further accomplished had he lived?

Wonderful reminder for us