The crimes of my ancestor


One thing I found fascinating when researching my ancestor Mary Bliss Parsons: learning what her “crimes” were.

In 1600s Springfield, Massachusetts, Mary began having spells while in church, at the same time that the minister’s children underwent the same fits. She was a grown woman with four children of her own at this point. Here’s what’s strange: another woman named Mary Lewis Parsons was accused of causing those fits. The two similarly-named women were not related.

Mary Bliss Parsons actually had to be carried out of Sabbath meeting along with those children. How dearly I would love to know what exactly was meant by “fits”—one description from later testimony was, “Shee would looke fearfully somtymes as if shee saw something & then bow downe her head, as others did on theire fits about that time.”

Mary cried out a warning that witches would creep under someone’s bed.  She struggled so hard in those church fits that it took two men to restrain her. It was said that Mary’s fits arose out of being locked in her own cellar by her husband, where she was tormented by spirits that would not leave her alone.

A neighbor testified that Mary told her she had gone to the river to wash clothes, and there spirits appeared to her in the shape of dolls. Whether this was hallucinated “truth” or a neighbor’s yarns, I feel anguish on her behalf if such terrifying visions presented themselves.

Three years later, Mary and her family moved to nearby Northampton, which her husband and others had purchased from the Native Americans for 200 yards of wampum (shells on strings), ten coats and a few trinkets. She had several more children.

In Northampton, Mary became viewed as not just a victim of witchcraft, but the source of it. When 11-year-old John Bridgman went into the woods to chase down the family cows, a force struck him on the back of the head. A while later, he stumbled and put his knee out of joint. The surgeon treated him once he had made his way home, but he was in agony for a month. In the early hours one morning, he cried out, waking his parents. He said Goody Parsons was trying to pull off his knee and was sitting, visible only to him, on the shelf.

(Goody is short for goodwife, a less prestigious version of “Mrs.”)

John was not the only one to point a finger at Mary. She was said to make spun yarn diminish in volume (clearly a bicker over reimbursement for cottage work); accused of making a cow die, an ox die and even a sow; and said to have the ability to go into water and come out dry. Another accusation that makes one worry for her domestic situation with her husband: she could always find the house key even when he hid it against her. Locked in the basement, locked out of (or in?) the house… Even without witchcraft, Mary’s life seemed full of trouble.

The most chilling accusation came from a woman besieged by bad luck. Sarah Bridgman, the mother of John whose knee had been so grieviously injured in the woods, had lost three newborns in succession. She blamed Mary for the death of baby James.

It’s one thing to make an ox die from rattlesnake bite on its tongue; quite another to cause a child to die. The stakes were suddenly much higher for Mary.

Talk was dangerous, and so to address the situation before it became worse, Mary’s husband filed a slander suit against Sarah Bridgman for calling his wife a witch. Dozens of people testified in this suit, and Mary’s husband won. Sarah was found guilty of slander and forced to either publicly apologize to Mary or pay a £10 fine (unknown which she chose).

Eighteen years later, Mary was again accused by the Bridgman family, this time of using witchcraft to murder Mary Bridgman Bartlett, Sarah’s grown and married daughter. Sarah was long dead by this time. Mary spent three months in a grim dirt-floored prison in Boston awaiting the trial where she was acquitted.

Mary lived a long life, dying in 1712 at the age of about 85. She had outlived her husband by 30 years. She escaped execution as a witch, but it is certain that gossip and suspicion must have followed her all her days.

My novel The Witch’s Trinity is set in medieval Germany where researchers say some villages burned a witch every three or four years over hundreds of years, as just a matter of course. There were even two villages where the women had been so systematically executed that only one remained. Can you imagine being that one woman left standing?

I chose to write about a character who was accused of witchcraft by her own daughter-in-law, and was not completely certain she wasn’t a witch. While in the course of writing the book, I first learned about Mary Bliss Parsons. It seemed an extraordinary coincidence that I only learned of my witchcraft lineage while writing a book on the topic.

I dedicated my book to her, because her story was so compelling and unfair and clearly illustrated how much she was a victim of her time.

My novel contains an Afterword about Mary, with more details about her life and neighbors’ testimony against her. If you are interested in googling Mary, please be sure to use her entire name (Mary Bliss Parsons) to avoid confusion with Mary Lewis Parsons.

- - - -
P.S. In looking for an image to accompany this post, I learned Mary Bliss Parsons has her own Facebook page. The web/world is so odd.....

P.P.S. I ended up using an image that is often identified as being a painting of Mary Bliss Parsons but is most definitely not her. I blogged about it in the past:
http://erikamailman.blogspot.com/2007/12/mary-bliss-parsons-is-that-you.html

P.P.P.S. I'm participating in a Twitterchat tonight under the hashtag #HistoricalFix with bestselling authors Katherine Howe and Cat Winter. It takes place 5:30-6:30 PST (8:30-9:30 ET) October 20, 2015. Lots of questions and giveaways: join us. 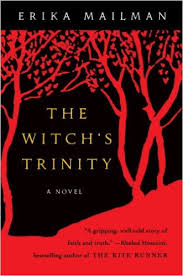 It's October 13, also known as Halloween for the Dyslexic.

I was thinking today about The Shining, one of my all-time favorite books and movies, and how genius it was that Stephen King broke one of the foremost rules about ghosts in it: that they have no substance.

That used to be the wonderful thing we could rely on about ghosts, that you could get through the night in the haunted house if you could just keep your eyes closed and chant the Barry Manilow libretto. But King gleefully dashed our hopes on the diaphanous wraith front.

I'll never forget how terrified I felt when Danny was actually displaying strangle marks on his neck. Thanks, Mr. King, for taking ghosts to a whole new level. And also for giving my sister Red Sox tickets off the radio.

A few other scary reads to recommend for this pumpkin-spice-infused month: 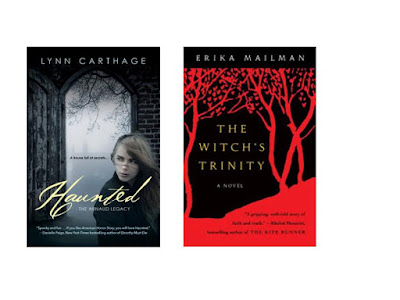 1. Print out your novel. You must. There are so many things that glide by on a screen that become glaringly apparent once you look at a hard copy. Then, read through the printout briskly two times, following the instructions in the next two bullets.

2. Read through the printout in a "doesn't feel right" run. Hold a highlighter in your hand and whenever writing quality flags, simply swipe the highlighter through that paragraph. Keep reading. The important thing is simply to note the places where the manuscript doesn't feel right, not to stop and fix those places. That comes later. You want to keep your eyes fresh, so keep going.

3. Then pick a different color highlighter and do a "bon mots" read-through. My goal is to have one well-turned phrase per page (or solid metaphor or incisive snatch of dialogue). If I swipe, I can visually see pages that don't have that, and go back in and add later.

3. Giving new meaning to "hot off the press": as you print out your novel, sit on it. This was the suggestion of the youth in my household, who waxed enthusiastic about the warm paper. Freshly-printed novels make great seatwarmers. She also noted that the heat transfers: "Feel my butt! Feel my butt!"  This is how fine literature is made.