Lizzie Borden and a jury of her NOT peers

In 1892, when Lizzie Borden was accused of murdering her father and stepmother with a hatchet, women were not allowed to vote. They were not allowed to serve on juries. Lizzie therefore didn’t face a jury of her peers; she faced 12 men who didn’t believe her physically or even foundationally capable of such a brutal murder.


Questioning at the inquest and trial looks at the height of her father, Andrew Borden. Could she, a woman, have been capable of felling such a tall man with such an instrument? Well, it helped her cause that he was reclining at the time, lying down asleep or close to it, on a lounge in the sitting room. Andrew was also very frail and thin. When I first looked at the autopsy photos of him shirtless, lying on a wicker autopsy table, I thought he was a woman. His thin chest even curves in to a bit of an hourglass waist.


And could Lizzie possibly have been capable of bringing down her very stout stepmother? Abby was 180 pounds, and short. Victoria Lincoln’s nonfiction book A Private Disgrace never talks of Abby walking without it being described as “waddling.” Her fat is relentlessly mentioned with deep scorn by Lincoln. Lizzie herself was quite solidly built and tall—but could she bring down someone likely more physically powerful than herself?


The first blow was established to be one on Abby’s forehead. She must’ve faced her killer, who raised the weapon and blatantly struck her while being watched. Now if her killer was her own stepdaughter, whom she had raised since the age of three, Abby must’ve calmly faced her hatchet-holding child, perhaps even amused to find her upstairs in the guest room with such an odd item in her hand. The wonderful Elizabeth Montgomery movie, Legend of Lizzie Borden, even portrays Abby as looking up at Lizzie from making the guest bed with a smile. Which quickly turns to a frown and then…well, you’ll have to watch the movie.


Subsequent blows were to the back of Abby’s head and neck. It is surmised that the killer straddled the now-face-down Abby and rained down the blows. It is fascinating that both deaths only involve blows to the head. Did Lizzie, or whoever the killer was (see how I did that?), read that there is not much blood flow to the outside of the head—I mean, certainly the brain gets blood, but the thin layer of skin covering our skulls doesn’t contain many blood vessels? Was the killer deliberately trying to attack a place on the body that wouldn’t create a huge flow of blood to be cleaned off, say, one’s clothes? 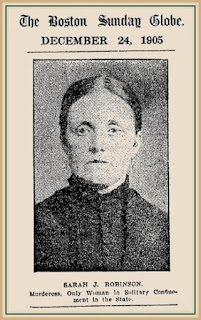 Getting back to the idea of that all-male jury in Fall River, Massachusetts. The name of Sarah Jane Robinson was evoked by the prosecution as an example of a woman quite capable of murder, thank you very much. Between 1881 and 1885 (the Borden murders were in 1892), and in nearby Cambridge, Massachusetts, Robinson murdered eight people. The difference to this jury, however, was that she did it in a womanly way: she used arsenic.

Moreover, Robinson was born in Northern Ireland, part of a a class of people despised at this time period (in fact, when Lizzie dispatched her Irish maid to find a doctor for her father’s corpse, she only asked for Dr. Bowen, kitty-corner to their house, and when he was not at home, she completely ignored Dr. Chagnon, kitty-corner to the back because he was French, and the next-door Dr. Kelly….because he was Irish. She instead asked for her friend Alice Russell).


Although the Robinson case first resulted in a hung jury because jurors were only permitted to know about one of the many proven arsenic deaths (bodies were exhumed and tested), a second trial allowed the admission of these other murders, and Robinson was sentenced to hang. A petition (signed by seven jurors!) asked that the sentence be commuted to life in prison and so she was, with the addition of solitary confinement. She died in prison in 1906.


I’m certain that had Lizzie Borden been found guilty, she too would not have hung. Public sentiment would’ve rallied deeply in her favor.


My point is that the Irish Mrs. Robinson, of a “dirty” immigrant class, who had used the effortlessly-delivered-in-food arsenic for her plots, was easier for a jury to find guilty than Massachusetts-born Lizzie Borden, whose father owned banks, who was very active in the church, who volunteered for the Woman’s Christian Temperance Union and the Fruit & Flower Society, who was accused of something so masculine as wielding a hatchet directly into family members’ brains.


Let’s take a moment just to consider such an act. Although perhaps farm women hefted axes to make firewood, to sever chickens from their heads, the genteel Lizzie Borden would not have done so. In fact, not even Andrew Borden did this work. A hired man came. In short, a hatchet was not a tool a woman was seen as using, so a hatchet as a weapon was an even farther stretch.


The Fall River Historical Society has a new artifact as of this summer: a letter Lizzie wrote to one of the jurors, thanking him for acquitting him. A thank you note: what a nice, ladylike thing to do!