It requires a little uphill drive from Angels Camp on a dirt road to find this cabin. You pass some donkeys who give their name to this place, Jackass Hill. You think you're the only history-minded person trying to find it, and you arrive, park, poke around... and then five other cars come and you exult that other people care!

It may seem at first flush that the cabin looks too fresh, too new to have been a place where Mark crashed in 1864.


But you still walk around and marvel. 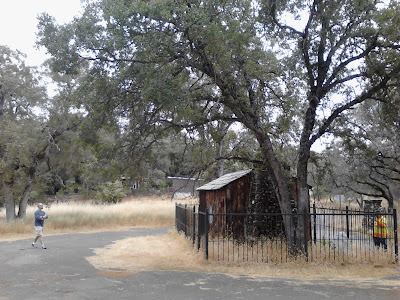 So, if you read the plaque at the site, you learn that this is not the original cabin. It was rebuilt 2002-2005 by the Rotarians. However, not even the original cabin was original! It was built in 1922 to commemorate Mark Twain's stay approximately 60 years earlier. Now who feels like a jackass??


This is a nice old plaque. Let's focus on that instead.


Am I the only one who wants to put a "C" in the word plaque? I always type "placque" and then fix it.

Sometimes it can be hard to chase down history. If Twain wanted the cabin where he stayed to remain into perpetuity, he should've asked for brick.

It's interesting to contemplate that Twain wrote "The Celebrated Jumping Frog of Calaveras County" here, as the placque suggests. Especially since the other plaque suggests the cabin is situated in Tuolumne County. #Hm.