Claws of the Cat launch!

My friend Susan Spann held her debut novel's book launch last night at Face in a Book in El Dorado Hills, California. It was a fantastic evening and I'm so glad the world now gets a chance to read her incredible book, Claws of the Cat. It's the first in a series featuring a medieval ninja crime-solver, Hiro Hattori, and his Portugeuse priest sidekick, Father Matteo. Here's a taste of the evening, rendered in photographs!


A group of us ate beforehand, steps away from the bookstore, at Chantara Thai. It was lovely to get a chance to meet Susan's parents who had flown up from Southern California for the event, as well as other friends of Susan's I hadn't met before. What a nice group of people. And thank you Paula and Spencer for dinner!

Face In A Book is a really great bookstore, and I'm so happy Susan had her launch there. It's a wonderful independent bookstore that supports its local authors.

Susan read from Chapter Four of her book and then answered questions from the audience. I asked a question I already knew the answer to, because it's so impressive. I asked, "How far out have you plotted this series?" THIRTEEN BOOKS INTO THE FUTURE, PEOPLE! I can't even conceive of that kind of planning. Frankly, I don't know what I'll be doing 13 days from now, let alone 13 books from now. Susan's  contract with Minotaur is for a trilogy but I have no doubt whatsoever they will be signing her on for the rest soon.

Afterwards some of us walked a block away to Starbucks (I love Town Center). I made everyone display their books on the table...and poor Susan had to sit on the floor. Not pictured are two other sweethearts who came: Diana and Heidi.

Postscript 1:
My husband read the first chapter the next morning, standing in the kitchen as he oversaw French toast production. He said, "Her prose is like Hemingway." I kid you not!

Postscript 2:
Someone else in the household thought the title was "Laws of the Cat" (which is funny because Susan is an attorney), and proceeded to list what those might be:

On that note, good night! Congratulations, Susan. I couldn't be prouder or happier for you. 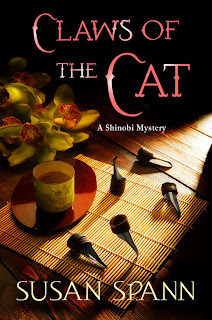 
I previously posted about the panel I served on, along with Kathleen Kent, Mary Sharratt and Suzy Witten, three fabulous and fascinating novelists who write about witchcraft. Now I'd like to talk about the Vinoy Hotel, where the conference was held....because it really was an amazing hotel.

It was very Floridian, with pink shell color on its Art Deco facade, but it also gave me Overlook overtones. It was a hotel of the same era, where people would come for the entire season and attend those balls with live orchestras.

In the lobby (besides an incredible Chihuly display), a collection of photos showcased the hotel's history and its astounding multimillion-dollar renovation. It had spent 18 years empty; there's something so evocative to me about formerly grand places in decay (viz., the Titanic).

The Chihuly Museum is here in town (the town being St. Petersburg, Florida). I really wanted to go. I love Chihuly, who I first encountered upon entering the San Jose Museum of Art, where he has two enormous hanging glass pieces in the front lobby...which made me think in an earthquake, I'd know exactly where not to stand. And then in the Bellagio in Las Vegas, I marveled at the magnificent Fiori di Como ceiling near the registration desks. Finally, Dale Chihuly gets sort of bandied about in a novel I'd just read called Where'd You Go Bernadette, which I loved beyond speaking, so I was really excited to see the evidence of his handiwork here and there in the hotel. Unfortunately, I wasn't able to swing visiting the museum although I walked right past it. Nor was I able to see the Dali Museum, whose architecture is said to be one of the top 10 buildings you have to see before you die. Well....now I don't have to die, right?

The hotel's bar was really lovely and I'm happy to say I spent a fair amount of time here chatting with friend and fellow novelist Vanitha Sankaran and then later....dancing to the DJ with a bunch of other booty-bumping HNSers. I didn't know until the next day that it was a wedding party. Without the veils and bouquets, who can tell?

Angry at myself for not getting a better shot of the lobby, the heart of the hotel after all. This is the room where you try to rally after a redeye flight, when it's 6 a.m. their time, 3 a.m. your time, and your room won't be ready for another couple hours. Luckily, there's a veranda with a great view of the boats in the marina so you can slump and contemplate dry heat versus humid heat until your room is ready.

But the room is worth waiting for!


The room was gorgeous and I contemplated sleeping on each bed on alternate nights. Instead, I stuck with the one by the door so I'd be aware and ready when Jack Torrance came with the ax. Actually, the Vinoy is reputed to be haunted. When I made my reservation, I specifically asked for a room that was not haunted. The woman laughed and said, But we need fresh souls from California.

She didn't really say that. I would have loved it if she had.

I had two windows with lovely views that really underscored I was in Florida. Palm trees! It's hard to tell, but the aqua square is a lovely fountain, and the white chairs are all set up for the wedding whose dance party would be later overtaken by bookish drunks on a tear. I kept looking at this picture, wondering what the odd pale business card looking thing is, with the blue stripe hanging down, towards the left of center. I just figured it out: it's my necklace thing, what's it called? That you wear around your neck so you can get into the conference? And the blue dangler said "Speaker" on it. It had flipped around backward to be immortalized in the window reflection.

I think that's all for the Vinoy. In my next post, I'll share images of some of the sessions I attended.