Repost: abuse of child witches on the rise 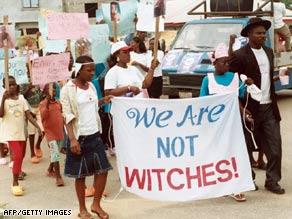 I originally posted this May 18, 2009. After my last post about the woman burned to death in Papua New Guinea, a commenter asked if there was anything we could do. I remembered this post contained a link to an organization helping children accused of witchcraft, so wanted to bring it up to the landing page again.

From today's CNN wire, the article "Abuse of Child 'Witches' on the Rise, Aid Groups Say" addresses the horrible plight of children stigmatized by the name witch. It follows in particular the story of 14-year-old Christian Eshiett of Nigeria, whose "rambunctious" ways led him to be repeatedly beaten, and to run away from home as a 12 year old, spending the next two years on the streets.


“Children accused of witchcraft are often incarcerated in churches for weeks on end and beaten, starved and tortured in order to extract a confession,” said Gary Foxcroft, program director of Stepping Stones Nigeria, a nonprofit that helps alleged witch children in the region.... The states of Akwa Ibom and Cross River have about 15,000 children branded as witches, and most of them end up abandoned and abused on the streets, he said.

Link here to Stepping Stones Nigeria, should you wish to donate.

Interestingly, Foxcroft feels the belief in witchcraft should be permitted to remain. I strongly disagree. As long as anyone believes another person wields supernatural powers, especially demonically-endowed powers, there is danger.

This is a very sticky issue for Africa and other parts of the world: Westerners don't wish to insist that such beliefs are superstititious or primitive. Medieval Europe found a way to extricate itself from such egregious beliefs (without the interference of colonializing forces). I honestly think the key is for economic conditions to improve. Crime rises when people are desperate--and accusing someone of witchcraft is a crime.

I don't support the belief in witchcraft. However, perhaps Foxcroft feels his best bet is to improve the system from within, allowing the belief to remain while removing children from its target:


“It is not the belief in witchcraft that we are concerned about,” Foxcroft said. “We acknowledge people’s right to hold this belief on the condition that this does not lead to child abuse.”

What do you think? I welcome comments--is the belief in witchcraft harmful in itself, or a benign belief system?

The image accompanied the article on CNN, with the caption "Children branded as witches protest on February 26, 2009, in the southern Nigerian city of Eket."

How I hate, hate, hate to write this post. It's been a long time since a modern-day witchcraft execution showed up in the news...and this time it was more brutal than usual.

We think of witchcraft as a belief abandoned in the Dark Ages.

The Associated Press reports today that a woman was attacked by a mob, tortured by being burned with a hot iron, doused in gasoline and set on fire on a pile of tires. Sound familiar? Yes, in two ways. One, the description of the torture sounds exactly like the torture applied centuries ago to medieval people accused of witchcraft. Two, a "witch" was burned atop of tires only about a year ago in Papua New Guinea. Here's the link to my blog post (and another) about that. It seems tire burning is their favored method there. Burning rubber to cover the stench of burning flesh? Perhaps.

Either way, it's horrible and kills me to read. Hundreds watched this woman's suffering and did nothing to stop it. They say it looked like fifty different people "had hands on her" during her time of torture. Imagine being the one small person in the middle of all that anger directed at you?

It is said she was accused of causing the death of a six-year-old child through sorcery. She herself was the mother of two, and it's said her husband was the main attacker against her.

I'm not a praying sort, but tonight my heart and my prayers go to her soul. 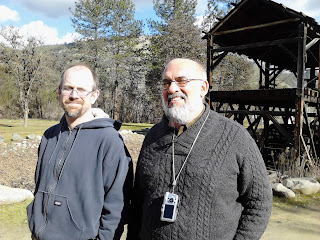 David Nicolai, former director of the Pardee Home Museum now living in China, was here visiting this last weekend and I took the opportunity to do some more history tourism with him, just like when he visited about nine months ago.

We now live in Gold Country, so it was a quick jaunt over to Sutter's Mill. Why is this place important? It's where gold was first discovered (well, by the people who cared) in California, setting off the Gold Rush and forever changing the landscape and way of life here. John Sutter had set up a mill simply to create timber...yet one day in the mill race (the water current running the water wheel) a big nugget sat shining and ready for the plucking. It was plucked and the world changed.

Here is David and my husband in front of a replica of the mill. The original was a bit further down the river and fell prey to time (it was understandably abandoned in favor of gold mining) and water deterioration. Here at the wonderful Sutter's Mill State Historic Park, there is a glassed enclosure of several beams from the original mill. 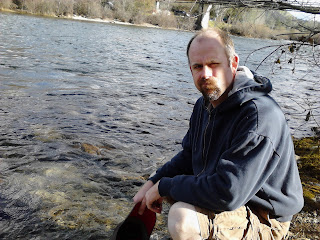 The next picture is my husband being a miner at the American River steps away. Glumly, he found no gold. We couldn't believe how blue and sparkling the water was. It is truly a gorgeous river, but we wouldn't want to stand in its icy waters all day to pan for gold, as the Gold Rushers did.