Klimt is amazing. This exhibit is incredible.
The colors and depth were so spectacular that when we moved from the Klimt exhibit into the older paintings in the permanent collection, I literally felt a let-down. The paintings there seemed flat. I still love them...but damn, Klimt does everything I want an artist to do!

(and Rodin's pretty cool too. But I have a grudge against him because it was at his museum in Paris that I hemorrhaged and had to go to the ER—my little French/English dictionary had the word for "miscarriage"—and thought I'd lost a baby yet again. But! she's here, thank God).

I like to say Legion of Honor. It sounds like you're not just looking at art, but doing something noble.

It's a glorious museum with a Rodin "The Thinker" out front and even a miniature pyramide de verre like the Louvre.

Anyway, I love Klimt and we drove six hours round-trip to see this exhibit (actually shouldn't have taken that long, but see previous post). Plus, wanted a date day in the big city.

It's a small exhibit with five rooms, but there is a wealth there that could take up hours if you weren't being jostled for space by lots of other viewers. Hint to Legion of Honor: please make description plaques twice as large (and maybe even duplicate them to place on either side of wider pieces)—sometimes you'd have to move through a sea of 20 people to read the plaque and then you don't get to look at the painting again with the newfound information. I heard several other people complain about the small print. 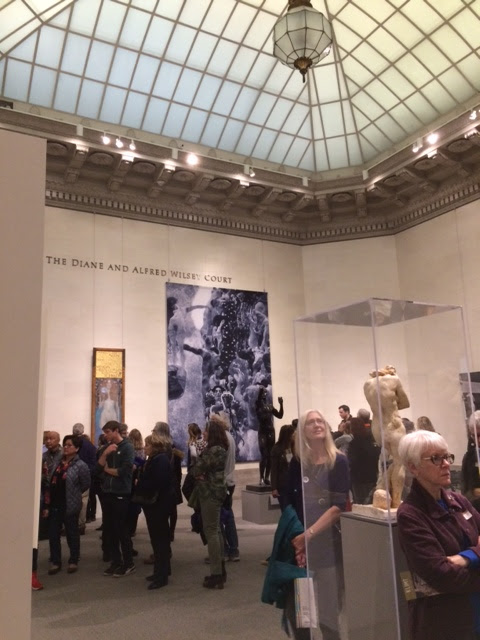 This exhibit space is gorgeous: look at the ceilings! The black and white photograph you see on the back wall is a reproduction of Klimt's "Medicine." See a few paragraphs below for an explanation.

This is Klimt himself, coolest of the cool. Sadly he died of pneumonia complicating his 1918 flu (which I blogged about here) or we'd have so much more art to delight our eyes.

One of the many things that makes him great:
He tried three times to get into the prestigious Ecole des Beaux Arts, failed and then went on to be one of the most well-known artists of all time.

Another thing that makes him great: he fathered 14 kids. And you can tell by this picture why and how:

Another thing: there is an early painting of his (a seashore landscape that I'm mad at myself for not photographing so I could show you) that is fully representational to the degree it's nearly photographic. He was so damn talented, but decided that was boring, and so moved on to create his own style. Here's a few details of his explosive use of color and built-up texture:

Another bit of admirable coolness: He was commissioned by the University of Vienna to create three huge paintings, allegorical representations of Medicine, Philosophy and Jurisprudence. He created the first, Philosophy, and it was thought to be pornographic and there was public outcry. He withdrew it and entered it in the 1900 World's Fair competition and won the Grand Prix! Eff you, establishment! All three were destroyed by a fire in the Austrian castle where they were stored during WWII, and all that exists are black and white photographs of these lost pieces.

If you live in the San Francisco Bay Area, this exhibit closes Jan. 28 so get thyself hence post-hastily!