Five states in four days...that was our drive from California, through Nevada, Utah and Wyoming, to arrive in Colorado. We had an amazing road trip and I have lots of historical stuff to share. I'll start first with the Wendover Airfield in Utah and its role in the launch of the atomic bomb (and I'll post again about the base in general, so stay tuned).

This airfield was an important WWII base nestled in the Great Salt Desert. Today, where men once teemed to ready their planes, the base is desolate, the hangars empty. There is a veritable atmosphere to the place.

Inside the very nicely-put-together museum, you can see a replica of "Little Boy," the bomb dropped on Hiroshima by the Enola Gay. It is astonishing to see how very small a device it is, to have wrought so much destruction. The replica shows signatures from the flight crew, including Col. Paul Tibbets, who was the pilot. 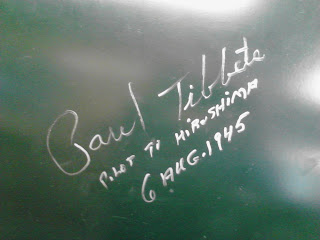 The museum features an audio of the Enola Gay being loaded on that fatal day, Aug. 6, 1945. You press a button and hear the busy airfield readying itself for the flight, the bomb being loaded, men talking, calling out to each other. I got a distinct chill listening to it, and listened to the brief clip several times. At the end, there's a little burst of jazz music and a woman singing--did someone turn on a radio? I was trying to imagine that day and how the men felt. Apparently, the true mission of the Enola Gay  was kept quiet to all but Col. Tibbets until the plane was actually underway, but you have to wonder...

Here's a scale model of the plane itself.


And a photograph of Col. Tibbets:


Tibbets died in 2007, and his cremated remains were scattered over the English Channel. He had feared a funeral or tombstone would provide a gathering place for those who objected to the use of the atomic bomb.

On Sept. 26, 2015, you can attend Wendover's 2015 Warbirds & Wheels WWII Commemoration celebrating the 70th year since the end of WWII.

Interviewing Pixar's Inside Out creators

Last month, I had the intense pleasure of a phone interview for Oakland Magazine with Pete Docter and Jonas Rivera, the director and producer of Pixar's Inside Out (they both have Oakland/Piedmont ties). I found the movie to be an extraordinary, moving film far deeper than what children might be able to garner from it. Its target audience basically is parents, a thesis which Docter and Rivera agreed to. Yet don't let that stop you from bringing your kids; there's enough there to entertain and amuse as young as five years old.

Due to the article wordcount I wasn't able to include all the great things they told me. I'll add one here. Jonas Rivera said that his favorite part of the movie is a short scene where Joy doesn't want Riley to go to sleep and they put on their favorite song and "she skates along with her. It's an impossible relationship; it's the only time they're on screen together." Riley doesn't even know Joy exists...it's a poignant thought that the single most important aspect of her young personality is unknown to her.

I watched a special media showing before the official release date with friend and fellow historical novelist Erin McCabe, and boy, were we both sniffling, as was the entire audience. Friends who cry together stay together, right? I watched again later with my family, and noticed more the second time. For instance, I had noted that Joy has blue hair, but it didn't really register until the second viewing. Joy must always be tinged with sadness, because the remembrance of joy is the remembrance of something we once experienced and can't ever again in the same way. Which reminds me, I really need to read Proust sometime.

My article begins, "Pixar’s magic: making the events on the big screen somehow related to our small, foible-filled lives. And this year’s offering Inside Out proves that enchanted formula works again, but this time to a degree that leaves audience members in tears of reflection." Read the full text at Oakland Magazine's website.

. . . .
P.S. I previously interviewed Brave's filmmakers and got to visit the much-vaunted Pixar campus in Emeryville, California. Read that post here.

P.P.S. One more tidbit. I felt the film may revolutionize how people think about thinking. For instance, if we have concrete ways of thinking about emotions, it might be easier to say, "I'll let Joy take the helm and push Anger aside." I asked Docter and Rivera if they intended that, as a bit of self-help for viewers, and they pshawed me. "No, we're just trying to entertain." Sure.:)