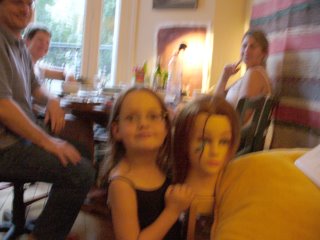 One of the questions I've had in Paris is: what happened to all the heads? I saw the mass grave at Picpus where the headless bodies went... but what about the rest? What does one do with 1,300 heads? (and that's just the Place de la Nation heads, let alone Place de la Concorde)

I saw some plaque I half understood. It seemed to say that people wondered if the heads were paraded on pikes but no one knows for sure. If only blogging existed back then!

Anyway... the friends we have stayed with several nights are ex-pats Karen and Dave and their child Elodie. Karen and Dave are ***wonderful*** and I wish I had known them better when they lived in San Francisco! Elodie is a true bilingual charmer and an incredible artist. Kirsten saw some paint/bleach print she made and vowed to uncover the technique for her own work!

Elodie has a head she got from a friend of the family who graduated from cosmetology school. Unknowingly, she named it Marie and her parents had a good laugh at that. I was there for the "big reveal," as they say on reality TV, but she seemed unfazed at the idea that her mannequin might be Marie Antoinette.

Her parents say they have been totally creeped out by Marie because if you glimpse her at night in Elodie's room, she really does seem to be another person in the room, just hovering at the wrong height.... ew!
Posted by Erika M at Thursday, September 14, 2006