Saturday: secure your every bit 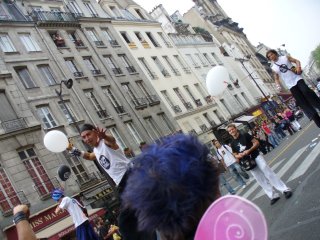 I did a walking tour of the Marais through Paris Walks. They are absolutely wonderful. I’ve done three walks, with three different guides, and they were all anecdotal, interesting and totally worth it. The best guide so far was Peter Caine, the one who runs the company with his partner Oriel. He was very British and funny.

Then, as I sat to eat lunch, I saw the police putting up tape to close streets. I asked the person next to me and she said there was going to be a Techno Parade! So I went a few streets over to watch it. It was formidable! Each “float” had a different DJ and dance crowd with it. I watched and danced for a long time. Although at times the parade was sparse (see the stilt walkers), the last float and its pushing overflow crowd made me feel a little Who-at-the-Riverfront-Coliseum so I took refuge in a doorway. This parade was to benefit No Famine, so I bought a pin.

One guy on a float threw me a condom. Labeled both in French and English, it says “Toujours un coup d’avance! Bit Defender: Secure your every bit.” I wish Alan was here to defend himself.