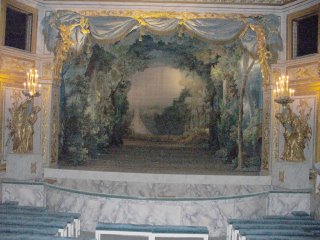 This trip is really a working trip for me; I'm gathering info and atmosphere for a new novel. So I've been paying lots of attention to Marie Antoinetteisms both at Versailles and in Paris (next stop: Conciergerie).

I also saw the new Sophia Coppola movie here in Paris. It's hard to ignore subtitles even when they're in a different language! I enjoyed the movie but thought it glossed over Versailles: no one had fleas, no one was pissing in the hallways...

Anyway, I'd never before seen Marie's little theater where she performed for friends. It is incredibly lovely with the scenery currently on stage, a verdant woodland path that looks like one at Versailles. The theater is behind the Petit Trianon, Marie's refuge from the crazy court life at Versailles, and only holds maybe 50 people? I should have counted the seats.

Also on the grounds at the Petit Trianon are the Rock, a pseudo grotto with running water built for her. I loved that and thought of a scene I could set there. (It also reminded me of the fake cliffs at Parc aux Buttes Chaumont, if I spelled that right, which I also really liked. Why do I like fake natural things?)

She also had a tiny chapel and numerous pavilions tossed around the grounds... it was a total playground. NOT to mention... the hameau. Which makes me wild with envy. Why couldn't **I** have a tiny mill on a brook, and swans, and a little tower with an eensy, tiny winding staircase that encircles it, and goats and sheep of a certain size and cuteness?

At the hameau (which means hamlet), Marie pretended to be a peasant (ominous irony), dressing as a shepherd. I've heard that they perfumed the animals so the smell wouldn't offend her nose. I read in another book that although she enjoyed the playacting, selling milk, cheese and vegetables from the hameau actually raised money for Versailles and was a real enterprise. It bears more research.

Unfortunately, I have no photos of the hameau. The memory card was full and I was too zonked to review the pics and delete some.
Posted by Erika M at Thursday, September 14, 2006