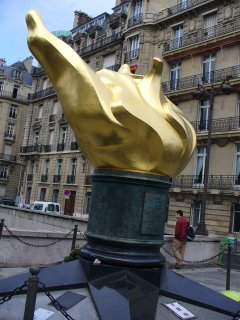 Here is the replica of the Statue of Liberty's torch, the exact size! It's at the Pont de L'Alma, where there is also some flowers and memorabilia around Princess Diana's sad death in the tunnel.

I forgot to blog about the fifth anniversary of Sept. 11, but it was very much on my mind. CNN was going to replay its broadcast of the day, which made me think some poor mushbrain would think we were under terrorist attack again. I had a dream related to jumping. I'm so sorry for the families hurt that day, and I'm sure five years feels like a heartbeat away.
Posted by Erika M at Monday, September 18, 2006