Back home with the ancestors 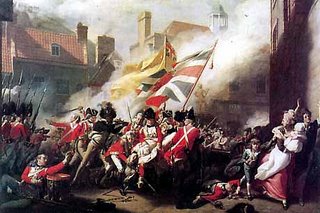 I've been asked to write an essay on my ancestor Mary Bliss Parsons, to be included in the back of HEXE when it is published next September.

Not something you hear too often. It's a fascinating story... it seems that her money and her looks had a lot to do with her ability to skirt the charge.

My parents have sent me some family history stuff, so I've been delving into that with great interest. And of course, as always when I'm researching, I've been getting waylaid, this time by stories of other ancestors. Tucked in with the Parsons family history is also the memoir of Benjamin Cressy, my seven-greats grandfather who fought in the Revolutionary War, as well as the autobiography of the seafaring orphan his granddaughter married.

Here's a bit from Benjamin Cressy's memoir of 1780, three years before the end of the war:

We were engaged that morning in putting our guns in as good order as possible, as they had got very wet the rainy night before. We did not run, yet marched a quickstep in order to gain the bridge that crossed a small river, but the enemy made their appearance on a rise of ground or hill directly on our right in less than gun shot. They hallooed and said, "Now you d-m-d yankees we will have you." Lieutenant Blake answered them and said, "Come on you redcoats, Black John is here." They understood this very well , for Black John had given them a number of dressings. We were then about half a mile from the bridge and the enemy formed a column of horse at the bridge in our front. There was an old mud fort breastwork within gun shot of the bridge and our brave captain Cushen marched us in there to rest our legs, as he said. [....]

When we had got into the old mud fort or breastwork we began a fire on the enemy between us and the bridge which continued for 10 or 15 minutes, and it was said we unhorsed eight of the enemy, but looking back on the road that we come up we espied a larger body of horsemen coming full speed in pursuit of us. Our Capt. ordered us to march out and every gun that would go off to load and not to fire before orderered; and being formed in a close column and the points of our bayonets for our flank guard we moved on a firm slow march a few rods and fired, broke the column of horse and they opened to the right and left and we marched over the bridge and drew off a number of the planks and every man of our party and prisoners, horses, &c got safe over and we gave three cheers.

Two of our men wounded, one Heath wounded by a ball that entered the bottom of the heel of his foot, one Andris wounded across the back of the hand. This small river had a very muddy bottom and the enemy could not cross it to pursue us and we returned to our regiment in triumph.

In another battle, he and his party were ambushed by the British, "and we poor fellows scattered like sheep without a shepherd in every direction, and with blood-hounds at our heels." That scene continues:

We run but a few rods when I was halted by "Stop, yankee, or I'll kill you." The first thought I had was that he had fired off his gun. I turned my head round when I was on the full run and had a fair look at his face, and he was not but a few jumps behind me and not one of our party to be seen. He was a large stout looking fellow, red face, red hair, and I remember his looks to this day. But I out-run him and turned round a small rise of ground out of his sight and crawled under a thick bunch of bushes or sprouts that sprung from a white maple stump. I lay there a short time and two of the enemy passed close by my hiding place on the other side. It appeared they were hunting up the scattered fugitives. The reader will better judge of my thoughts and feelings than I can describe them. When I could distinctly hear the shrieks and cries of the dying and wounded. When these two men were passed by out of my sight I shifted my quarters into a low piece of ground very thick with bushes and briers. There I lay till after twelve o'clock that day, but the course of nature seemed to be changed, for the sun was risen out of the southwest to me.

After the war, Benjamin's story is grim, with two wives dying young and the typical yet still heartbreaking loss of children in infancy, and a brother who continually tricked him out of money and property. Hard times!

I feel so lucky to have these records from the past. I'm also surprised how modern Cressy's memoir sounds, for having been written over 200 years ago. My parents have a painting of Cressy, one of those where because of the way the eyes were painted, anywhere you stand in the room it appears he is looking right at you. I used to get creeped out by that painting. But now that I know the sadness of his life, the next time I see it I'll give him a friendly nod.
Posted by Erika M at Sunday, September 24, 2006

fascinating snippets. i wish i knew things about my distant ancestors. i think the blue trail goes cold in the middle of the nineteenth century. mom's family kept better records, so names are known, but not stories. at least none have been passed to me.

i look forward to your novel. and of hearing of your thrice-acquitted witchy ancestor.

I also have a son Benjamin E. Cressy. Most of our Cressy relatives are buried in North Beverly. You must be a relative. John H Cressy Jr. Exeter NH