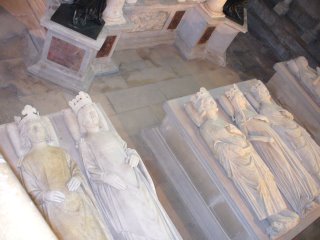 The effigies at St. Denis were incredible. Every bit as spooky and magisterial as you would expect.

Marie Antoinette is buried here (remains having been exhumed from initial burial site) under a fairly modern and bland plaque. No effigy for her or Louis, but there are two nice statues of them.

St. Denis also had something to do with Joan of Arc... she laid down arms here or something? I have to google it because I didn't understand the plaque in French on the door. Wish my comprehension was a hundred times better... but it is certainly improving! Since I've returned, I've watched two episodes of French in Action and I think I get it better than I did before this trip!
Posted by Erika M at Sunday, September 24, 2006