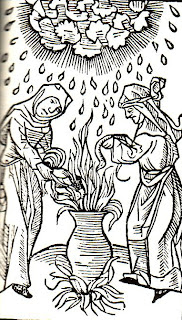 Yes, penis theft is in the news again, with this article on Yahoo commenting in turn on an article in Pacific Standard magazine.

Penis snatching (or shrinking) makes its way into our news every year or so. It would be hysterically funny, this Freudian fear that someone has snatched your penis, made it invisible, or made it smaller, were it not for the fact that the people accused of doing this nonsensical act are often killed.

For the crime of penis theft.

It's considered an act of witchcraft...and it dates all the way back to medieval Europe. The Malleus Maleficarum, the famous witchhunting Bible, has several passages about witches stealing men's penises, including one in which a multitude of snatched penises are stored in a bird's nest. Whenever I hear about these modern-day reports, I blog about them, so here are some archival posts if you are interested:


The image is from the 1489 edition of De Lamiis, a book about witchcraft. It shows witches calling down the rain.

I'm so glad I'm not a man. Just the thought of it.. :)
Seriously though, if nothing is actually stolen, then why the punishment?