For those of you coming to this blog because of the Book Bub promotion, I wanted to repost something about the woman depicted on the cover of Woman of Ill Fame. 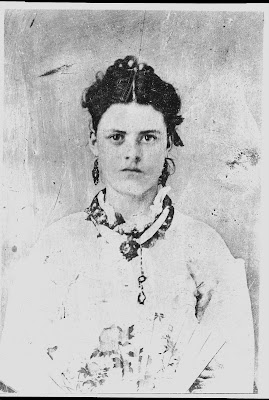 
--This is a reposting; I know there is renewed interest in Woman of Ill Fame and so I'm going to put this blog post up again.


This blog is currently about witchcraft persecutions, ancient and modern, but now and then I will dip into material regarding my first novel Woman of Ill Fame. The novel is about a Gold Rush prostitute in a dangerous, brand-new San Francisco.

A few days ago, someone was in my archives and saw my post about the real-life prostitute whose image is featured on the cover. All I knew was that her name was Timberline, she was a Dodge City prostitute, and her image is in the collections of the Kansas State Historical Society.

Well, the anonymous commenter wrote that her name was Rose Vastine.

That for one thing totally threw me. Although I fashioned my character based on this photograph and named her Nora, for some reason I had “felt” that this real woman’s name was Kate.

Secondly, the commenter wrote that she earned the name Timberline for being 6’2” in height. Another big surprise. In my mind, the nickname had dirty connotations!

Armed with her real name, I consulted Professor Google.

The first link I accessed made me gasp out loud in the café I was working in, and literally grab my forehead. According to Linda Wommack’s Ladies of the Tenderloin, “Timberline climbed up into the hills above Creede and shot herself not once, but six times.”

When you have spent so much time staring at someone’s photograph and constructing an entire novel around them, you develop a strange and intense connection to them. It was almost as upsetting as hearing this news about someone I knew…but not only was Timberline a stranger to me, but she died 150 years ago. Whatever sorrows she endured, they are dust now.

I had dedicated the novel to two wonderful women the world lost at an early age, and on the second line dedicated it to “Timberline and the other girls of the line: I hope the world was kind to you.”

And here was evidence that the world had not been kind to her.

The link went on to say that Timberline did not die from that suicide attempt, but strangely enough, another link had her recovering from an “intended overdose.” Is it apocryphal that she tried to kill herself with such vastly different methods and survived both times? Whatever the truth is, she must have been an unhappy young woman.

Several sources have her living in Creede, Colorado, a silver mining camp 420 miles from the Dodge City that her photograph is labeled with. Sure enough, the website for Creede, Colorado mentions Timberline on its “About Creede” page. Bat Masterson too (whose biography the commenter mentions) lived in both cities, so maybe she hitched a ride with him.

If anyone has any more information on her, I’d most definitely love to know it.