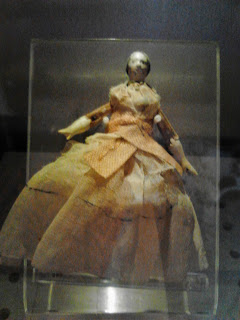 My registration with the annual Donner Party Hike permitted me free entrance to the Emigrant Trail Museum. I think this was my third visit. Each time, I watch their half-hour video in the theater and each time I regret it. Why don't I learn?!

Seriously, although small, this is a fascinating collection. And there are dioramas, which I can never get enough of. History + Dollhouses = Diorama. Please don't get me started on the gigantic, ever-circling diorama at the O.K. Corral, narrated by Vincent Price. I hope it's still there.

Anyway, the museum displays a doll that apparently once claimed to be (well, the doll herself didn't claim; her humans did) the original one hidden by Patty Reed when her parents demanded they leave everything behind when they had to abandon the wagon(s).*

Let's back up. A few weeks prior, I visited Sutter's Fort. The true Patty Reed doll is on display there. I asked a docent if it was really was, because I knew there had been some controversy over the two museums' displaying of the doll. He rolled his eyes and diplomatically reported that there had been much trouble over the doll. Patty Reed left it to Sutter's Fort upon her death, in thanks for the free and generous care given to the emigrants when they finally made their way down to Sacramento--not to mention the fact that Sutter organized and funded the rescue parties--but apparently the museum at Donner Lake had it for a while and wanted to keep it. It's also traveled to Washington, D.C., to be exhibited at the Smithsonian.

This is from Gabrielle Burton's fine memoir, Searching for Tamsen Donner:

"A sign said that the original doll was on display at Sutter's Fort, but the ranger told me privately that over the years and the swapping back and forth, the original and the replica had gotten mixed up; no one knew anymore which museum had the original. I was appalled that even the experts didn't know, even more appalled when I got to Sutter's Fort and saw a shiny wooden copy of the doll that no one could possibly mix up with the weathered doll at Donner Pass. The ranger, training for his summer job, was passing on a good story, but not a true one."


I don't know much about object sharing between museums, but I believe a paper trail must accompany any shipment of an artifact. I don't buy the ranger's story that they got confused over the years--he makes it sound like they threw the doll in a cardboard box and sent it over the pass in a pickup truck. Also, possibly the two dolls have been switched since 2009 when Burton's book published, but I'd wager the Emigrant Trail Museum doll is the shiny one with overly-bright cheeks, and with a dress that looks like someone rubbed some dirt on it to make it look vintage. Who knows? I don't have an expert's eye and I believe that's why I was never asked back to be an evaluator on Antiques Roadshow. ;)

Judge for yourself. Below is the Emigrant Museum's doll in her fabricated snow habitat, and below that is the Sutter's Fort doll (supposedly the original). 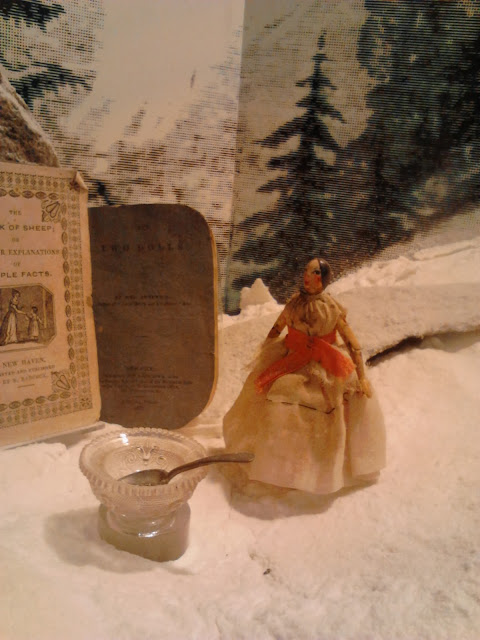 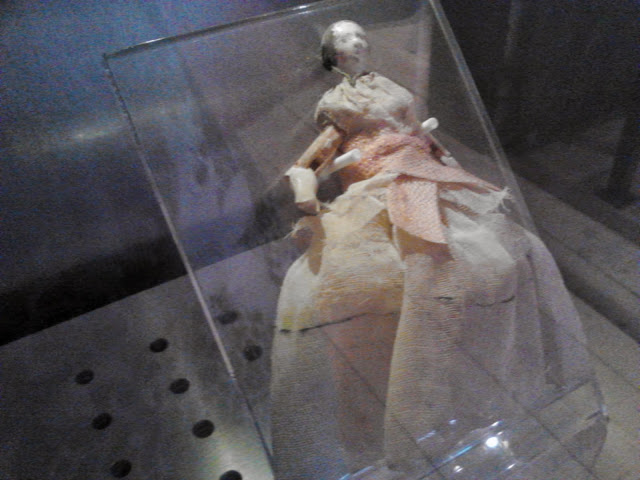 I wish I had been able to obtain better images--you can google around and find excellent professional photographs. One last thought: the Sutter's Fort doll is certainly treated like she's the real deal. She's in an enclosed, temperature-controlled exhibit case (see below). The doll itself is surprisingly small, perhaps 3-4 inches. 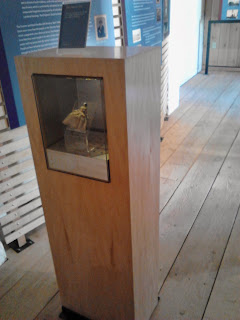 *It's maybe just me, but I'm sure the parents knew. How can you not play with a doll you have when you're snowbound for four months, and how can your parents not notice? Perhaps they smiled privately and enjoyed letting her think she had gotten away with it. After all, in Ethan Rarick's book he closes with the lovely anecdote that after the rescue, Patty sat by the fire enacting the voices of the rescuers, using her doll. That shows that she played with the doll by voicing it--something she surely hadn't been able to suppress during the long entrapment. She was only eight, after all.