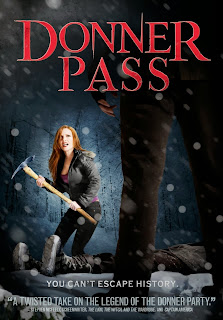 A few nights ago, I watched "Donner Pass," since it streams for free on Netflix. I want my hour and a half back. Besides being a hardly-scary horror movie (they filmed some stuff in broad daylight, which was so corny it was laughable....at least give us some darkness to lend an air of fright. I guess it's harder to figure out lighting in night scenes and this was a low-budget film.)

But instead of taking pot shots at its quality (two words: fish and barrel), I'd like to focus attention on something far more deplorable. In the opening scene of the movie, George Donner shoots three other men and sinks to his knees to ferociously rip out their innards and eat them.Worse, modern-day characters later say that he lured the party to the mountains to eat them.

Really? George Donner? That poor elderly man whose world came to a halt after his hand got cut? Antibiotics would save his life today, but in 1846 he and his family had to hunker down in the snow at Alder Creek, seven miles from the rest of the people trapped at Donner Lake, while the infection traveled from his palm to his shoulder and killed him. He made a lot of mistakes, but undergoing endless months of strength-stripping travel simply to feast on flesh at the end does not make a lot of sense.

The Donner Party people were victims. They did not kill each other to eat (oh wait, yeah, it's believed a small subgroup of the party, far from the camps and trying to make it out through the pass, did intentionally murder Luis and Salvador. And those were two men who had come in relief parties to try to help them. Horrible! But the people trapped in the camps only ate flesh of corpses, and that with great reluctance.)

They were victims. They were starving to death, trapped in snow so high that they could barely walk. Try to hunt in that. Try to cut down a tree for firewood in that (it sinks down through the snow and you have to dig to retrieve it). Try to locate your lost cattle in that so you can eat their frozen carcasses--you won't be able to find them although you'll endlessly try with a nail stuck to a pole, sinking it into the snow and hoping to feel the pole stick on something.

A movie like this is kind of like a movie about the Titanic disaster in which the people deliberately try to drown each other with demented glee.

This movie made me outraged on behalf of the Donners. Had I lived through such suffering, I would be bitter that the circumstances of my months of terror were now fodder for a cheap horror movie.