Last weekend I did the annual Donner Party hike, and wanted to talk briefly about the tent the George and Tamsen Donner family wintered in, 1846-47.

Here's the plaque that shows an artist's rendering of how they might have fashioned their shelter, by propping poles diagonally against an existing tree trunk, and covering it with the wagon canvas, branches and buffalo hides. 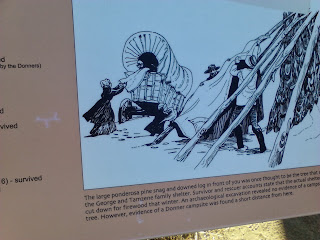 The only problem is, that structure simply isn't large enough. Into that space went George and Tamsen and their five children. Eliza Donner Houghton, three at the time, wrote in her book that sleeping platforms were built by driving poles straight into the ground and then lying branches horizontally: the depiction above would not permit such platforms. George Donner was an invalid from his hand-injury-turned-infection and surely had to lie down: a grown man takes quite a bit of space when resting on his back. Add in the fire--and the space around it which is too hot for human occupancy--and you've run out of room. Did the tent possibly completely encircle the tree?

I'm wondering if perhaps the poles were much longer and hit the tree further up, creating a wider, taller space. In one of the sources, I read that when visitors came--such as rescuer Clark, who spent two weeks with the Donners--there was not enough space for everyone unless if they laid in their beds. That says to me that besides the beds, there was open space.

There's also question about whether a teamster or two sheltered with them. One of the sources says that besides the nearby tent for the Jacob Donner family, there might have been a third structure for the teamsters. Given that they had tried first to construct a genuine cabin and abandoned the effort when it was four logs high, thanks to the fast-flying snow, it's hard to imagine that they bothered to make a third structure. But maybe they did...as we know, emotions were running high and maybe nuclear families wanted to withdraw and be with their own.

EITHER WAY, this was a terrible place to ride out the incredible storms of the Sierras. They couldn't have been very windproof, and they were soon covered with snow (like, completely buried in the snow, and they had to dig their way out to try to hunt or cut firewood): as the sun came out and warmed the snow, it would drip into their lodging. One source says Tamsen once despaired because her children had been wearing wet clothes for two weeks straight.

There's a tree still extant that purports to be the exact tree the George Donner family built their structure against. This is it: 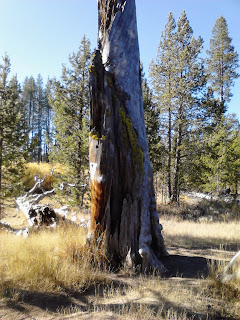 It's labeled with a sign from Peter Weddell, who says he was shown the tree by Charles McGlashan, the Truckee man who compiled survivor testimony in the first book about the Donner Party.

There are several problems with this identification. McGlashan had been unable to locate the site as late as 1879: after three decades in a woodland area with repeated snowfalls and melts, it might be pretty dicey to locate such a temporary shelter. Moreover, the area had been unceasingly picked by relic hunters and scavengers: both human and animal. The fourth relief--who brought out the sole survivor Lewis Keseberg-- reported that the Alder Creek encampment had clothing and property strewn across the snow: the camp's demise was coming as quickly as that of its unlucky inhabitants.

In 1884, McGlashan walked the Alder Creek area with Jean Baptiste Trudeau and still couldn't determine the precise spot for George's shelter. The same was true in 1892 when John Breen visited McGlashan.* Weddell may have misunderstood McGlashan.

Another key bit of data that had been forgotten and then rescusitated by Donner Party historian Kristin Johnson: the mention in Eliza's book that relief party men had cut down the tree their shelter rested against, for firewood. If so, there would be no tree to label and revere. This is problematic too: how could they remove the tree that everything rested upon, without the entire structure collapsing? Is it possible they cut the tree farther up, above the snow line and above where the supporting poles rested?

One of the frustrating things about this story is that much of the information is confusing or in some cases contradictory.

There has been a lot of archeology in the meadow. Our guides told us that a hearth was located: of course, nothing so blatant as a circle of stones, but instead an accumulation of orange dirt that indicated long-term fire that changed the composition of the soil (I'm only halfway through An Archeology of Desperation  or I'd probably be able to write something smarter). Long-term fire is key: the Donners were here for four months, but many others have trooped through the area and built their fires. The discovery of the hearth almost certainly means one of the Donner sites was found: but which one? The site is not labeled and that's intentional. After a century and a half of people disturbing the site in their quest for Donner money or Donner relics, they want to protect it. An object, once taken from its original resting place, is of no use to an archeologist; it must remain in situ.

Sidenote: the guides told me of a similar situation, the nearby petroglyphs by the Washoe people. After a decision to plaque it and mark it for others, the holy site has been ravaged. "We have a sign saying please don't climb on the rock, and then I see 20 people up there," said one of the guides sadly.

So...the bones. They located thousands of fragments of cooked bone--and not one of them was human. That fact, when first released, caused a sort of hubbub where people jumped to the conclusion that cannibalism had not taken place at Alder Creek. The important distinction is that only cooked bone (and the guides talked about the "pot polish" on the bones, showing they had been boiled and stirred so much that they took on a surface from the metal pot) can survive. An uncooked bone--and anecdotal evidence seems to suggest that viscera were removed, and tissue cut from the bone, for consumption--would not have survived all these years.

There was a little Tupperware that went around our group, holding bone fragments and even a piece of clear bottle glass. So remarkable to hold these things!

*An Archeology of Desperation: Exploring the Donner Party's Alder Creek Camp, edited by Kelly J. Dixon, Julie M. Schablitsky and Shannon A. Novak. This very recent (2011) book was recommended to me by Kristin Johnson, and represents the latest knowledge about Alder Creek, fortified by the archeological digs performed there.

Very cool trip, Erika! I'm fascinated by the Donner Party as well. I even showed a video to one of the history classes I taught. My students were a bit horrified by it, alas! One woman muttered, "That was worse than a horror movie!" I guess not everyone has my tolerance for the morbid!

Hi, Erika! So glad you enjoyed the hike (and didn't get snowed on). Great coverage and photos, thanks! Kristin

Xina, I too gave my poor students some Donner assignments: a letter to Lansford Hastings being one of them. :)
Like you, I have a high tolerance for the morbid.

Guest star appearance!
Thanks for coming by and commenting, Kristin! :)