Striking it rich at Malakoff 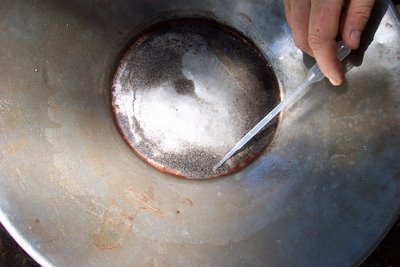 We panned for gold in a trough under the auspices of a ranger who was very nice and told us if we'd shown up 15 minutes later she would have seeded our trough with gold flakes from the gift shop. Our timing is always wretched.

Nevertheless, my friends, without the assistance of said seeding, I found several flakes of real, true gold. Alan did too. The ranger in this photo uses a plastic syringe to point to a speck of gold. Yup, that's how small it is.

Panning is really mind-numbing after a while. Initially, exciting. But when you realize you will have to find many, many specks to even begin to craft a necklace, you think that maybe it IS a good idea to aim a hydraulic hose at the hillside and let mercury float down to the San Francisco Bay.

For a quarter, we bought a little vial to put our gold flakes into. Upon subsequent viewings, I think some of the "gold" was mica since it is dark on one side... sigh.
Posted by Erika M at Thursday, July 13, 2006