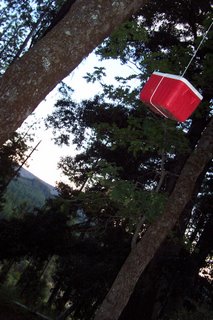 I made reference in an earlier post to seeing a bear at Malakoff. It was in the campground! In daylight!

Alan: Uh, Erika, there's a bear!
Erika: Oh my god, you're right!
Alan: [turns around and walks other way]
Bear: [watches]
Erika: [starts to do same as Alan, remembers you're not supposed to turn back on bear]. Hello, MISTER BEAR! [loudly] What's up, BEAR?
Bear: [turns around and runs away, terrified by girl's shrill voice]
Later...
Alan: Sure, you're terrified when you encounter a little tiny bug, but when you see a bear that could maul you, you're unaffected.
Erika: I'm not scared of mammals.

One thing I like about Alan is that he thinks of, and does, things other people might scoff at. Like, for instance, hanging the entire cooler from the tree. It didn't seem logistically possible, but it was! All night long the cooler gently swung and deterred bears from eating its contents. Forget renting a bear box from REI: this is the way to go.
Posted by Erika M at Thursday, July 13, 2006

We do not allow hanging any food, garbage or coolers in trees. Bears have a great sense of smell. They can and do clime trees. Campers must use the bear food lockers provided in each camp site. (no extra charge) Failure to comply to bear warnings could result in a citation, resulting up to a $1,000.00 fine and/or six months in jail.