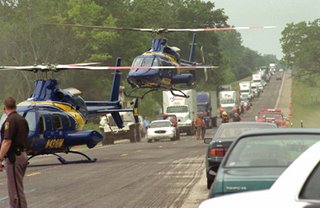 I visited an acupuncturist for the first time last week. Along with a stick of mugwort I must light and hold next to my ankles every day, she put a little Barbie-sized band-aid inside my ear. Embedded in the “band-aid” is a tiny gold BB. When I am stressed, I am supposed to press and hold the BB for ten seconds. I really like having a tangible thing to do when I’m stressed. I’m sure my acupuncturist wouldn’t have predicted this, but I basically have my finger on that button 24/7 these days. It’s addicting.

Today, I was on the freeway, motoring along 70 mph-ish, when the driver of a huge van realized he/she was about to miss their left-hand exit. I was in the lane NEXT to the exit lane—the van, which was initially in the lane to my right, moved across my lane and over. The only problem was, there wasn’t enough time or space to do this.

I braked so hard the tires squealed (more like screamed) and the car shimmied in a desperate lurch, and laid on my horn HARD, but the van didn’t stop. It was going to exit there, by god, even though physics were not on its side.

We nearly collided. Had I not been absolutely alert, and had my brakes not worked really well, I would have been toast. After all, the van was large and I was in little Lewis, the van was aggressively moving across THREE LANES, and we were both pummeling along at 70 mph. This would have been the kind of accident that the airlift helicopter comes for.

The van exited (barely) and I continued on, shaking, smelling for miles the burning rubber coming in from my tires. I reached up and pressed my little stress button for all it was worth.

People! It is not the end of the world if you miss your exit. Take the next one and double back. It’s not worth killing yourself and others.

P.S. After I went to google and looked for an image to accompany this post, I realized my last post was ALSO about helicopters…. coinky dink?

my husband just went to an accupuncturist for the first time, too. and we just moved here from portland. and i see you are in oakland, too. cool.