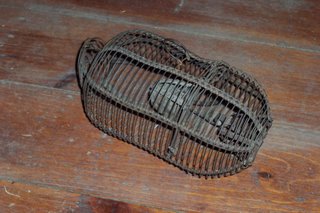 This rat trap was on the floor of the kitchen in the main house in Malakoff Diggins. Can't remember the name of the family, but the father supposedly was a grubstaker. He'd seed land with gold, sell it to excited suckers, and then sit back and watch the land fail.

He also ran a saloon and let miners keep a running tab. Now and then he'd ask them to pay up the tab, and some of them would say, "Man, I don't remember drinking at your establishment last Thursday..." and he'd say, "Yeah, that's because you were drunk." Some people think he was dishonest in creating entries in the credit log...

Kashi said this house is reputedly haunted. An audio tape left recording apparently picked up a piano playing, when there is no piano in the house. Another recording has a woman adamantly saying, "Downstairs... downstairs," as if she is ordering a bad child to go downstairs. There's a legend that a child fell down the (indeed very steep) stairs in the house and died.
Posted by Erika M at Thursday, July 13, 2006