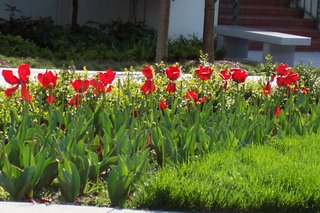 My favorite flower is a tulip, and my favorite color in tulips is red. These are at the Mountain View Cemetery right now, for the Tulips Days they hold annually.

Frederick Law Olmsted, who designed the cemetery and also New York's Central Park, was adamant that cemeteries should not be like parks. I had a hard time understanding this for a while. Mountain View is designed with beautiful curving roads that sinuously and organically cut into the hillside, and its stretches of greenery are visually stunning... isn't that what you mean by park?

But yesterday I spent some time thinking about it as I climbed the cemetery's hills. I think the Victorians were into picnicking at cemeteries, bringing the whole family and a gingham blanket to sit upon. And maybe that's what park meant then: simple, mindless enjoyment -- whereas Olmsted wanted an acknowledgment of the sobriety of death...?

I think he would have approved of how I visited the cemetery yesterday. I was there initially to take a photograph of a monument for my history column, and then decided to walk for an hour (yes, the cemetery is that large) for exercise... but the tombstones I read as I walked soon had me in a thoughtful frame of mind.

The mowers had just mown the grass, so the air was filled with that staggering scent of summer, and the trees in blossom also sent their odors wafting... the grass was the bright almost translucent green of a heavily rainy winter... The lawn rolled down to a vista of ocean and distant cities. I stood there gulping down all the ecstasy the earth was serving up: dazzled; really, lucky. Lucky to still be here and experience it.

As I looked at the 1800s graves of children who lived for hours, or lived for months, with a granite lamb atop their stone to say how the parents grieved, as I smiled at some of the outlandish names, as I saw newly-placed flowers and even several true mourners crouched or on their knees, fresh in their sadness, I thought that all I could do was try to be good in my own way. This would all pass, this sensation, this brightness, my skin... my only job was to be aware and thankful.

And Olmsted's landscape made such "large" thoughts possible. It is easy to see the earth's cycle and know your place in it when nature is hand in hand with the dead.

And on to some cemetery gossip: the unendowed section of the cemetery? What a frightening mess. Gravestones buried half-cocked under grasses, split into pieces. I found a pile that looked like they had simply been thrown in a mass from wherever they once stood. I thought if ghosts exist, they're here in the unendowed section, furious, bewailing their forgotten state...
Posted by Erika M at Saturday, April 15, 2006

Very nice post. I can see Olmstead shivering with the idea of people eating atop the dead.

I'm sorry, could you please repeat that? I didn't hear you the freakin' ninetieth time!!!