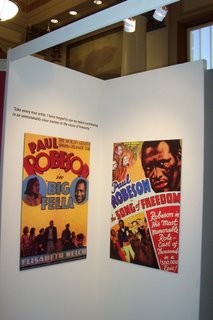 Paul Robeson…. a pity we don’t know this name better. He was an amazing man. This guy fought for what he believed at great personal cost. For one thing, visit here to read the transcripts of his appearance before the House Un-American Activities Committee; he held his own and showed those interrogators as the buffoons they were. It’s interesting to read this after seeing Good Night and Good Luck not too long ago.

The funny thing is, I had decided quite randomly to write my history column on Robeson, based on a photograph in the Oakland History Room of him singing to inspire WWII shipworkers in Oakland. For lack of a better reason, I was going to tie my column in with the movie I just mentioned… but the librarian at the History Room said, “Oh, you’re writing about the exhibit?”

Turns out that serendipitously, there’s a fabulous exhibit up now at the African American Museum and Library at Oakland (AAMLO) with all kinds of video monitors so you can see the great man in action and hear his insanely deep baritone voice. One of the things this exhibit stresses is that Robeson was the first to underscore the impo

rtance of Negro spirituals by performing them in sanctified concert halls. They're more than just work songs—they have a depth and power and distinct philosophy about life and pain; they are a legitimate artform.

Speaking of powerful songs, the exhibit also talks about “Old Man River” and how Robeson was best known for that song, although its lyrics are stereotypical and he had to change them. I still get chills, however, at that line, “I’m tired of living and scared of dying/But Old Man River he jes keeps rolling along.” As a young girl growing up in Vermont looking through our Broadway showtunes book, I remember being awed at the desperation that lyric expressed. I’ve still never seen Showboat; I should rent it. 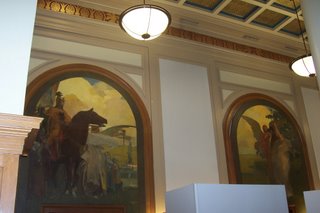 he HUAC was so suspicious!

AAMLO is graced with six Arthur Mathews murals, out of an intended 12 (the library ran out of money, back in the early 1900s). Two panels were completed and burned in the fire associated with the 1906 earthquake (whose centennial was yesterday), so Mathews had to repaint them. My museum friend Diana says the Oakland Museum will be doing a Mathews exhibit next year: can’t wait.

I would be suspicious of any communist tomato as well. Mr. McCarthy, thanks for protecting the right for me to consume free tomatoes.