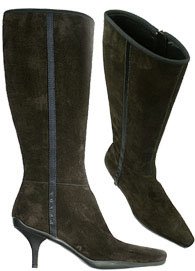 Went to the SF MoMa yesterday (sans Randolph and Kirsten this time) to see the 1906 earthquake photographs. Odd that a museum of MODERN art is showing 100-year-old photos, but no matter; for me, history and modernity co-exist peacefully.

Because I was wearing high-heeled and quite pointy-toed boots*, standing and looking at the exhibits for three hours became painful. So I sat down to watch Steve McQueen’s Drumroll for a lot longer than I would have otherwise.

This is a film McQueen made with three cameras affixed in a rolling cement mixer he pushed down the street, apologizing to passersby as he went for the space he took up on the sidewalk. Two cameras were mounted inside the mixer, facing outside right and left, and one on the outside that rotates with the drum, so you can see the blur of McQueen’s body over and over. The three circular images are displayed side by side. As soon as you walk into the dark exhibit space, you’re instantly disoriented because the circling images make you feel like you’re rotating as well.

At first I thought the images were mundane, endless taxi wheels and pedestrians’ feet, but my cruel shoes encouraged me to stay and watch longer. And hey, it got really cool the longer I stayed. I’m always telling my critical thinking students to “observe longer,” and it definitely paid off here.

I started noticing little things I wouldn’t have otherwise, like how the three images fit together and share some cornerspace with each other and figuring out that the blur was the artist (of course the placard says this, but I didn’t get it until I got it, and then it was an aha). I became in tune with the rotation, breathing with the grinding sound the mixer made, at peace with being upside down. Way cool.

And I’m guessing this is not the Steve McQueen of the acting world.

The day previous, I had heard a DJ on the radio saying that the Beatles and the Beach Boys had a sort of competition to see who could be more revolutionary and groundbreaking in their music, apropos of “Yesterday” being the first rock song to use a classical quartet. And then I came to the MOMA and saw that artists were doing the same thing: Jeff Koons with his ceramic Michael Jackson and monkey, the surrealistic photographers, the artist who bounced a basketball covered with paint over a canvas and called it art, the artist who did the same with naked women’s bodies (well, I guess instead of dribbling the women, they writhed on their own.) It was a nice synchronicity to see the same principle applied to two different art forms.

I loved my afternoon there.

And then I walked to BART, seriously looking around to see if there were any shoe stores because my feet hurt that badly. And wouldn’t you know it, it was commuter rush hour after five o’clock and I didn’t get a seat. I stood all the way to Oakland thinking evil thoughts about my beautiful boots.

*my boots are taller and pointier than the ones pictured… and also less Prada.