The delights of Soho, then and now: C.C. Humphreys guest blogs today 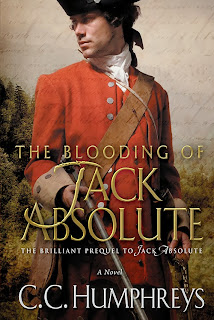 Today I'm delighted to host C.C. Humphreys on my blog, a wonderful writer of the Jack Absolute series. His latest is out, The Blooding of Jack Absolute. Is that not an incredible book jacket? Publisher's Weekly describes Jack Absolute as "an 18th-century 007 lifted from Richard Sheridan's play The Rivals." And if that doesn't interest you, then I don't want what can be done for you.

Today Humphreys tells us about his favorite (although he'll add that British "U"--I love it) neighborhood (wait--"neighbourhood") of London. I'll let him take it from here.

The first half of ‘The Blooding of Jack Absolute’ is, at least in part, my love letter to the area in London I love best: Soho.

When I left school at 18, I decided to take a year off before I went to drama school. My parents had just moved to Spain, so I needed to work to live. After a brief, underpaid spell with a bank, I decided I needed to earn much more money, so I became a motorcycle messenger, that mad breed whizzing around the metropolis delivering papers to businesses. It was dangerous work – taxi drivers seemed determined to kill us! But if you worked hard you could earn a lot of cash. That also depended on getting to know London really well, all the short cuts, all the illegal cut throughs – you were paid per delivery.

The company was based in Soho, just off Soho Square. Since this was the '70s, the area still retained its sense of sin, with striptease bars and invitations to visit ‘Buxom Model: First Floor,’ on cards in many a doorway. There was still a famous brothel in Meard Street and, on quiet days, the working girls would delight in leaning out of the windows and making this naïve youth blush beetroot!

It was also – still is – a very 18th century part of the world for that was when it was really developed. The houses are mainly those classic, narrow, three storey affairs. So it was natural for me to set a lot of my new novel in the streets I loved. I got hold of John Roque’s map from 1746 and enjoyed what was the same, what had changed. The area where Brewer Street meets Wardour Street has lost its name since then – it was called ‘Knaves Acre,’ a title I had to use. There’s also Thrift Street that, after some time of Cockney pronunciations – they cannot say ‘th’ making it ‘f’ has become what it is now: ‘Frith Street.’ And in the little alley that runs between Dean Street and Wardour Street, where I used to go and get a bacon sandwich between rides, there’s little dog-leg halfway along it – that’s where Jack visits the occasional prostitute, Matilda.

Ah Soho! I still love going back now. I am a member of a club, Blacks, in Dean Street, in a house where Samuel Johnson had a dining club. It's cleaner now, less sinful But I still blush when I remember some of the things those working girls said to me, when I was near as young as Jack Absolute!