Shelters of the Donner Party


A full seven miles away, on the shores of what is now Donner Lake, three other shelters served the non-Donner members. One was a fairly decent log cabin used by Moses Schallenberger two winters before (like the Donners, he wintered at the lake, and his memoirs make good reading). Patrick Breen and his family were presumably the first to arrive at the lake, and first come-first served. On the site of the Breen cabin now stands the Pioneer Monument, a fairly ghastly depiction of man, woman and child groping their way to California.

Famously, the base of the statue is 22 feet, the snowfall the winter of 1846. Lots of people dispute that number, saying it was the accrued snowfall that melted and refell--that at no time would 22 feet of snow stand. But check out this factoid from Truckee's wikipedia entry: "The maximum 24-hour snowfall was 34.0 inches (86.4 cm) on February 17, 1990." Unfortunately, there were no meterologists monitoring things at Donner Lake that year, but we have reports of unrelenting snowfall from Breen's extant diary.

Here's a close-up of the plaque on the monument. I cannot believe it mentions virility, since it was the men who made the disastrous decision to take the fatal Hasting's Cut-off, while poor Tamsen Donner clearly advocated staying on the proven trail. A fellow traveller's journal reports her sour disposition as the men overruled her. 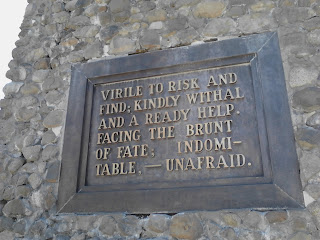 Here's a drawing of the Schallenberg cabin as it might've appeared when the emigrants first arrived, before it dawned on them that they weren't going over that mountain range anytime soon... 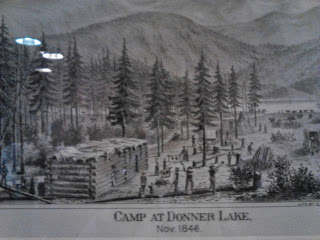 And the same cabin now covered in snow, only its two chimneys visible. Sobering sight. 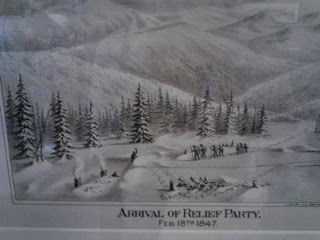 The Breen cabin, windowless, with no true roof and covered by buffalo hides, was the best of the shelters. The Murphy family built their shelter against the side of an enormous rock.

Here's a drawing of how the rock/cabin combo might've worked. 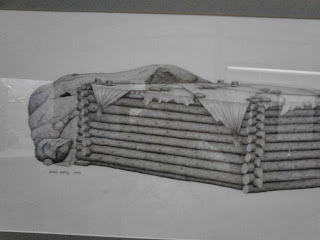 Yet a third structure was built, for the Graves and Reed families. Here's what's so extraordinary. Of course the Donners were far away at Alder Creek; George had become injured fixing his wagon, so they had to stop and reassess. But the families that made it to the lake--why did they build their structures so far apart? After all, there is safety in numbers, especially for people that had seen firsthand how Native Americans could endanger them (major historical irony). Historian Kristin Johnson thinks they were just so exhausted by dealing with each other--after the worst.roadtrip.ever.--that they chose to set their cabins far apart, even if meant terrible slogs through 22-foot snow to reach each other with news or to ask for food.

Standing at the Pioneer Monument (i.e, the Breen family cabin), you can barely see in the distance the tall Shell gas station sign (a yellow blob atop a pole in the center of this photo: look just to the right of the green road signs) which marks the approximate spot of the Graves-Reed site. In the opposite direction, walking from the Breen site to the Murphy site is a good, brisk walk in decent weather, and would be quite an undertaking in snow.

Walking from the Murphys to the Graves? You'd need a car.


Tired of the Donners yet? There's more to come.

I am not tired of the Donners yet! Fascinating stuff.

have been studying for two days the Donner Party. Fasciniating!

How were you able to read Schallenberger's memoirs? I can only find library copies available to view at the library themselves in the Santa Clara public library system?

To better clarity, I can only find library copies of Opening of the California Trail. Is the memoir you mention Moses Schallenberger at Truckey's (sic) Lake? I have had a fascination with Emigrant's Gap and the Donner Party for years! After our semi-annual trip this week to Tahoe City, I knew you had written about the Donner Party and started going through your blog entries and getting books from the library about the Donner Party. I really want to do the Donner Party Hike this year if it is still taking place!