Interview on Illuminations by Mary Sharratt

I’m so happy to host Mary Sharratt today. She and I are both witchcraft authors; her novel The Witching Hill focused on the Pendle (England) witches of 1612. Because of our witchy connection, we presented together at the Historical Novels Society and have developed a warm camaraderie. Besides being a well-spoken advocate for witches, Mary’s a fantastic writer (I also loved her earlier novel The Vanishing Point, set in Colonial America). 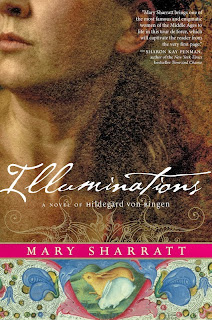 Her latest book Illuminations focuses on perhaps the best-known anchoress of all time, Hildegard of Bingen. Anchoress, you say? So…she was a sailor in charge of the anchor?

No, an anchoress was someone who chose to remove herself from society for religious reasons and often was permanently enclosed in a cell attached to a church. She bricked herself in to meditate, pray, and offer counsel through a window to the outside world. Says Wikipedia,

“In the Germanic lands from at least the tenth century it was customary for the bishop to say the office of the dead as the anchorite entered her cell, to signify the anchorite's death to the world and rebirth to a spiritual life of solitary communion with God and the angels.”


An anchorite is a male anchoress (so Wikipedia messed up! Surprise.)

Who was Hildegard of Bingen?

Born in the Rhineland in present-day Germany, Hildegard (1098–1179) was a visionary abbess and polymath. She composed an entire corpus of sacred music and wrote nine books on subjects as diverse as theology, cosmology, botany, medicine, linguistics, and human sexuality, a prodigious intellectual outpouring that was unprecedented for a 12th-century woman. Her prophecies earned her the title Sybil of the Rhine. An outspoken critic of political and ecclesiastical corruption, she courted controversy. Late in her life, she and her nuns were the subject of an interdict (a collective excommunication) that was lifted only a few months before her death. Hildegard nearly died an outcast.

In October 2012, over eight centuries after her death, the Vatican finally canonized her and elevated her to Doctor of the Church, a rare and solemn title reserved for the most distinguished theologians. Presently there are only 33 Doctors of the Church, and only three are women (Catherine of Siena, Teresa of Ávila, and Thérèse of Lisieux).

What inspired you to write a novel about this 12th-century powerfrau?

For 12 years, I lived in Germany where Hildegard has long been enshrined as a cultural icon, admired by both secular and spiritual people. In her homeland, Hildegard’s cult as a “popular” saint long predates her official canonization.

I was particularly struck by the pathos of her story. The youngest of 10 children, Hildegard was offered to the Church at the age of eight. She reported having luminous visions since earliest childhood, so perhaps her parents didn’t know what else to do with her.

According to Guibert of Gembloux’s Vita Sanctae Hildegardis, she was bricked into an anchorage with her mentor, the 14-year-old Jutta von Sponheim, and possibly one other young girl. Guibert describes the anchorage in the bleakest terms, using words like “mausoleum” and “prison,” and writes how these girls died to the world to be buried with Christ. As an adult, Hildegard strongly condemned the practice of offering child oblates to monastic life, but as a child she had absolutely no say in the matter. The anchorage was situated in Disibodenberg, a community of monks. What must it have been like to be among a tiny minority of young girls surrounded by adult men?

Disibodenberg Monastery is now in ruins and it’s impossible to say precisely where the anchorage was, but the suggested location is two suffocatingly narrow rooms built on to the back of the church.
Hildegard spent 30 years interred in her prison, her release only coming with Jutta’s death. What amazed me was how she was able to liberate herself and her sisters from such appalling conditions. At the age of 42, she underwent a dramatic transformation, from a life of silence and submission to answering the divine call to speak and write about her visions she had kept secret all those years.

In the 12th century, it was a radical thing for a nun to set quill to paper and write about weighty theological matters. Her abbot panicked and had her examined for heresy. Yet, miraculously, this “poor weak figure of a woman,” as Hildegard called herself, triumphed against all odds to become one of the greatest voices of her age.

What special challenges did you face in writing about such a complex woman?

Hildegard’s life was so long and eventful, so filled with drama and conflict, tragedy and ecstasy, that it proved mightily difficult to squeeze the essence of her story into a manageable novel. My original draft was 40,000 words longer than the current book. I also found it quite intimidating to write about such a religious woman. In the end, I found I had to let Hildegard breathe and reveal herself as human.

If Hildegard has long been venerated as a “popular” saint in Germany, why did it take the Vatican so long to canonize her? Why Hildegard and why now?

The first attempt to canonize Hildegard began in 1233, but failed as over 50 years had passed since her death and most of the witnesses and beneficiaries of her reported miracles were deceased. Her theological writings were deemed too dense and difficult for subsequent generations to understand and soon fell into obscurity, as did her music. According to Barbara Newman, Hildegard was remembered mainly as an apocalyptic prophet. But in the age of Enlightenment, prophets and mystics went out of fashion. Hildegard was dismissed as a hysteric and even the authorship of her own work was disputed. Pundits began to suggest her books were written by a man.

Newman states that Hildegard’s contemporary rehabilitation and resurgence were due mainly to the tireless efforts of the nuns at Saint Hildegard Abbey. In 1956, Marianna Schrader and Adelgundis Führkötter, OSB, published a carefully-documented study that proved the authenticity of Hildegard’s authorship. Their research provides the foundation of all subsequent Hildegard scholarship.

In the 1980s, in the wake of a wider women’s spirituality movement, Hildegard’s star rose as seekers from diverse faith backgrounds embraced her as a foremother and role model. The artist Judy Chicago showcased Hildegard at her iconic feminist Dinner Party installation. Medievalists and theologians rediscovered Hildegard’s writings. New recordings of her sacred music hit the popular charts. The radical Dominican monk Matthew Fox adopted Hildegard as the figurehead of his creation-centered spirituality. Fox’s book Illuminations of Hildegard of Bingen remains one of the most accessible and popular books on the 12th-century visionary. In 2009, German director Margarethe von Trotta made Hildegard the subject of her luminous film, Vision. And all the while, the sisters at Saint Hildegard Abbey were exerting their quiet pressure on Rome to get Hildegard the official endorsement they believed she deserved.

Pope John Paul II, who had canonized more saints than any previous pontiff, steadfastly ignored Hildegard’s burgeoning cult, possibly because he was repelled by her status as a feminist icon. Ironically, it is his successor, Benedict XVI, one of the most conservative popes in recent history—who, as Cardinal Ratzinger, defrocked Matthew Fox—finally gave Hildegard her due. Reportedly, Joseph Ratzinger, a German, had long admired Hildegard.

What relevance does Hildegard have for us today?

I think that Hildegard’s legacy remains hugely important for contemporary women. While writing this book, I kept coming up against the injustice of how women, who are often more devout than men, are condemned to stand at the margins of established religion, even in the 21st century. Women priests and bishops still cause controversy in the Episcopalian Church while Pope John Paul II called a moratorium even on the discussion of women priests.

Modern women have the choice to wash their hands of organized religion altogether. But Hildegard didn’t even get to choose whether to enter monastic life—she was thrust into an anchorage at the age of eight. The Church of her day could not have been more patriarchal and repressive to women. Yet her visions moved her to create a faith that was immanent and life-affirming, that can inspire us today.

The cornerstone of Hildegard’s spirituality was Viriditas, or greening power, her revelation of the animating lifeforce manifest in the natural world that infuses all creation with moisture and vitality. To her, the divine was manifest in every leaf and blade of grass. Just as a ray of sunlight is the sun, Hildegard believed that a flower or a stone was God, though not the whole of God. Creation revealed the face of the invisible creator.

Hildegard’s re-visioning of religion celebrated women and nature and even perceived God as feminine, as Mother. Her vision of the universe was an egg in the womb of God.

Hildegard shows how visionary women might transform the most male-dominated faith traditions from within.

What’s next? Do you have a new novel in progress?

I’m working on a new novel, The Dark Lady’s Masque, which explores the life of Aemilia Bassano Lanier (1569–1645), reportedly the Dark Lady of Shakespeare’s sonnets. The highly-cultured daughter of an Italian court musician, she was also an accomplished poet and the first English woman to publish a collection of poetry under her own name.

Mary, thanks so much. I wish the best success for your novel and for the world to get to know Hildegard, who was so deeply extraordinary.


To view a book trailer for Illuminations, click here.