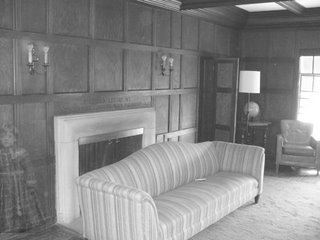 My friend took me to Mills College, which she attended in the late ‘90s, to show me where some scary stuff had happened. She is convinced the place is haunted.

In one dormitory’s lounge, she showed me where she had discovered a hidden door in the wall – you can see it in this photograph. We pried it open once again. It’s boarded up inside but we surmise there used to be a staircase or other passageway here.

The ghost story for this dormitory is that people have heard a child in the hallway playing with her ball, but when you go and look there isn’t anyone.

I took a bunch of digital photos and didn’t download them immediately. No, I waited until I was sleepless at four a.m. when it suddenly occurred to me, hey, I could see how those photos turned out. I was convinced in the blue glow of my monitor, with no other lights on, that I was going to see spectral images within the photos.

But that didn’t stop me from figuring out how to Photoshop in a little girl and emailing it off to my friend. Hope it makes her catch her breath!