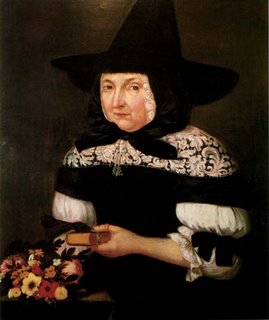 Ah, the residents of Springfield, Massachusetts in the year 1640… how well I know your names!

I spent all day yesterday at the Sutro Library researching the early Parsons family history, part of my project to learn more about my ancestor accused of witchcraft. And my god, it is like skipping stones, to watch the ripples that fold out and out and out. It’s exhausting. Because my ancestor was not the only one accused of witchcraft, and in fact there’s a complex network of neighbors v. neighbors, and trials affecting other trials, and bitterness pervading through the decades until more accusations are raised…

When I left yesterday, I felt like all afternoon I had been in a dim Colonial cottage, subject to the whispers and suspicion myself. It gets into your blood, gives you a distasteful feeling.

The other day I found a website that listed all the inhabitants of Springfield in a particular year… there were only about 40 of them, and yet I recognized their names, some of them, as testifiers in my ancestor’s case. As I continue to research, those names come up again and again until I almost feel I know them.

Oh, yes, here’s Elizur Holyoke, the guy who wrote down all the testimony, and here’s his son born in 1641… well, and six months later Union Moxon is born; Moxon being a surname I recognize as that of the minister’s children who had fits and caused a woman to be accused of witchcraft, which trial in turn caused my ancestor to have fits… it’s all so insular and incestuous.

I pulled out my huge family tree chart (it’s three feet by two feet) and scanned names again. Sure enough, some of the people who testified in my ancestor’s case were also my relatives. What else could you expect in such a small town?

And most chillingly, but I have to better confirm this, it looks like the father of my ancestor’s accuser shows up on my family tree, by way of what would have been a sister of the accuser. How horrible.

The picture above is Mary Bliss Parsons, the woman accused of witchcraft that I'm related to. I found the image at www.downstreet.net/runoverpagecopy.htm.
Posted by Erika M at Thursday, October 12, 2006

I hate to say it but Mary Bliss Parsons looks like us!!
Brenda

I'm a 9th g grandson of Mary, and the only known redhead in the family... hmm, I see a resemblance...

The redhead connection is interesting... my gfather and sister both very striking redheads. Wonder if MBP was red too.

I've seen a painting of MBP with a child, and they both have red hair... I recently found out my ggg grandmother was Mary McLean who's ancestors were irish... would love to swap family history, your distant cousin- Steve