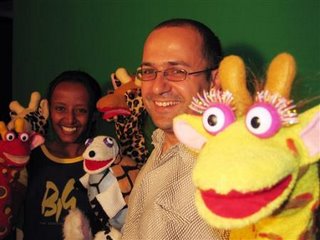 Our friend Shane Etzenhouser moved to Ethiopia about four years ago with the idea of starting up a puppet show. He met a gorgeous woman there, Brukty, and they got married. They collaborated on the show, a mixture of sock puppets and computer animation, which is now being televised to great acclaim. It’s Ethiopia’s answer to Sesame Street.

Today there were articles in the SF Chronicle and the Washington Post about them. What they’re doing is pretty amazing because illiteracy is a problem in Ethiopia and this show provides a way for kids to learn their alphabet and other important things without going to school, which many children aren’t able to do.

The show’s theme song is in Amharic and says of Tsehai, the charming childish giraffe who is the star of the show, "She asks a lot of questions because she loves learning."

Most moving was the idea that the show might be shown on the big screen in a Times-Square-esque place in Ethiopia where hundreds of street children live. Who knows if seeing Tsehai could make the difference to one of those kids, beginning to arm them for success in a way that wouldn’t have been possible before.