A Woman of Ill Fame postponed 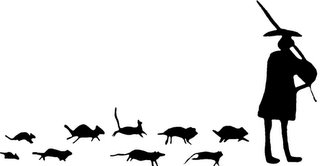 My Gold Rush novel A Woman of Ill Fame has been pushed from this fall to spring ’07.

People make fun of me for this expletive, I guess because it sounds very Nancy Drewish, but I’m confident in my ability to, on occasion, swear like a sailor at port. All my sisters say “Rats” like me, and we emphasize the sulky pathos inside our disappointment.

I’m part of a growing movement to reinstate “Rats” as a commonplace expression. Let’s say, you’re circling the block for the third time and see someone pull into a choice parking space just in front of you: Rats!

You’re trying to find your ringing phone somewhere in the house, and just as you spy it, the caller goes to voice mail. Rats!

The exclamation is satisfying not only in its syncopated consonance, but also because it’s evocative of a time when a medieval woman might see the flicker in her kitchen and scream “Rats!”

And of course there’s the whole carrying-the-Bubonic-plague thing.

According to my dictionary, rat comes from the Latin root rodere, to gnaw. And there is no mention of rats as an expletive.

The image above comes from an illustrated online version of the Pied Piper, a really horrible story where a piper steals all the town's children. I think this story is where the phrase "You've got to pay the piper" comes from... because if the piper had been paid for ridding the town of rats, he would not have taken the children.

Anyway, I had hoped 2006 would be the year I’d hold a published novel in my hands (uh, one that I wrote, I mean). Seems like I’ve got another 12 months to go.

I know what you mean about using something off the beaten path for an expletive. When I was in high school I toggled back and forth between 'fuck' and 'shit' in anger, surprise, emphasis, whatever. I nearly forgot what I was saying *where* I was saying it on several occasions, so I tried to use 'gadzooks' instead. It was meant to be funny, and I certainly used it to ham it up a little in my effort to be more aware of my growing blue streak!
That lasted a bit, but not long. I became better at self censoring. At this point in my life, however, I prefer the satisfying blend of consonants with 'goddammit!'
For what it's worth, I have heard of a teacher utilizing the word rutabaga effectively for herself as well as her pupils.