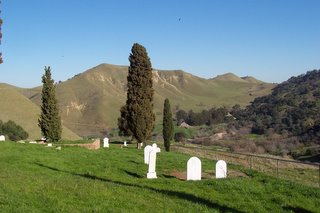 Alan and I hiked the Black Diamond Mines preserve today. I had been out there on Sunday with the Nature Friends and liked it so much I wanted to show him.

This was where coal mines operated from 1855 to 1902. The pioneer cemetery, shown in the top two photos, holds over a hundred graves of the Welsh miners and their families. It’s so sad to wander the tombstones and see the very young death dates. Thank you, modern medicine!

Several of the stones said, “Gone but not forgotten,” and that seemed like such a cruel irony… because of course the people who pledged to never forget are themselves forgotten.

There’s rumors this cemetery is haunted, but I didn’t get that vibe at all.

After the coal mines closed, in large part because – well, do you use coal to heat your house anymore? (When I lived in Ireland, I did! I used to love going to the corner store with my coal hod to load it up. Peat smells a lot better when it burns but is much harder to get lit)

Anyway, the world moved away from coal and towards oil, and the mines closed down. The five little towns filled with 5,000 residents closed up shop and moved the buildings to nearby towns. Twenty years later, the mines were again used, for sand required for the glassmaking process. As Alan and I hiked, we saw plenty of the sand on one of the trails and I picked some up. It was fine as Mexican beach sand. 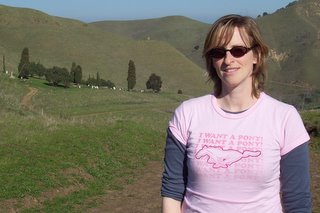 Oakland’s Hazel Atlas Glass Company used sand from the Somersville Mine, and thanks to this Oakland angle I was able to create a Montclarion history column. Doing a Google image search on Hazel Atlas brought up pictures of beautiful Depression glass, including some striped tumblers I’m sure we had in our house growing up.

My sister Christa is a big antiques person and when she comes out here next month, I’ll have to ask her about it. She knows a lot about bottles because for several summers we rented a cottage in Maine that sat on the edge of a Victorian bottle dump. We had a great time excavating the Lydia Pinkham’s Elixir bottles.

The Hazel Atlas mine portal is open for tours starting next month, but in the meantime there is beautiful hiking to do on the 5,717 acres set aside by the East Bay Regional Park District. Bravo, EBRPD! I think here in the Bay Area we get complacent about our open space and forget that it took a lot of planning and fighting to get these places preserved.

Right now, the road to the Black Diamond Mines is lined with trees in full blossom and the hillsides 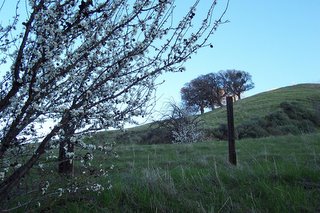 are bright green, with cows so happy they run! Soon, the summer sun will bake the hills brown and the cows might get a little logy… but right now everything’s bright and springlike. Hard for this ex-Vermonter to realize it’s February.

On a final note, I remember that when we were kids we used to shout "Black Diamonds!" as a sort of "no tag-backs" to timeless classics like "I hit you first/owe me a hot fudge sundae/no returns/Black Diamonds." (We'd say this rhyme in lieu of Jinx when two people said the same word at the same time, since it afforded no bad luck to anyone and even ensured ice cream for the future.) Someday I'll have to get to the bottom of that rhyme and figure out what Black Diamonds really means.