Hamlet in a Sweatshirt 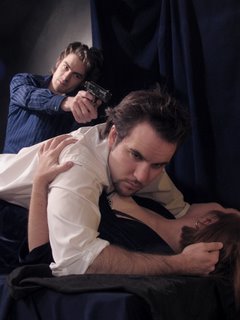 You have to check out Impact Theatre’s Hamlet, playing through March 18 at La Val’s Subterranean Theater.

Usually I’m not a big fan of let's-set Shakespeare-in-another-era, but this version which casts Claudius as the modern-day President and Gertrude as the First Lady with a drinking problem is great.

Hamlet, played by Patrick Alparone, sulks in his dark sweatshirt like the teen he is. His bouffant hair is reminiscent of James Dean, and his talent is also reminiscent of that actor. Whenever Alparone’s on stage, the Elizabethan language makes sense. In fact, I had to lean over to ask my friend Chris, who is teaching Hamlet this semester, “Is this pretty much verbatim?” and his answer was “Yes.” In some other characters’ mouths, however, the text is as wooden and impenetrable as a foreign language.

This production begins with a wordless “montage” as the Ghost watches Claudius and Gertrude silently and lustfully embrace, as Hamlet and Ophelia kiss, as Hamlet greets Horatio, etc. I loved this Ghost for his bewildered, skinny patheticness. I think other versions of Hamlet make the Ghost very kingly and severe…this time I felt the deep puzzled sadness the Ghost feels about how the living have behaved since he departed. And, might I add, thanks to Alparone’s acting, this is the first time I truly felt that the Ghost was Hamlet’s **DAD** and that the whole play is imbued with that loss.

Incidentally, the song “Glycerine” played as the Ghost observed the fickleness of the living. “Don’t let the days go by….”

Claudius is another strong player. He is the kind of blustery guy who ruffles everyone’s hair and has easily squeezed into the king’s position of power.

Polonius got outright laughter, deservedly. And he was a dead ringer for Michael Cors, so I kept expecting him to say, “Ophelia, your garment looks like a baboon exploded on it.”

The second half of the play was far less powerful. I’d in a heartbeat go see the first half again, but would rather not see the second. Intermission broke just before the long scene where Claudius tries to calm Laertes, and all the momentum from the first half just vanished. Another criticism is that they cut out the “Alas poor Yorick” scene, which is an important accompaniment/contrast vehicle to the “To be or not to be” speech.

A scene that could be stronger is the one where Polonius is slain behind the curtain. Both Hamlet and Gertrude continued along as if Polonius had been pinched rather than killed…. and his body was literally in the scene as poor Michael Cors tried not to breathe. Finally, actors behind the scenes were quite noisy, such that I wanted to shush them.

Those are small criticisms for a really wonderful production. In this black-box cellar, there was not a whit of scenery and yet the show was just as vivid and riveting as if there had been a real castle with its battlements and great hall. (Or I guess in this retelling, it would be a real White House with its oval office and Lincoln’s bedroom.)

I’ve been doing a lot of research into medieval witchcraft over the last year or so, and that really helped inform this play for me. For instance, the way Hamlet lingers over deciding whether the Ghost is really his dad’s spirit or instead a demon makes total sense. This was an era when people believed demons took the shape of neighbors, and spirits visited during the night: no wonder Hamlet is unsure what to think. It’s easy to discount him as a wuss: hello, your dad asked you quite specifically to avenge him, what are you waiting for? But knowing more about the belief systems of the time allows me to consider him as a little more complex than that.

[And speaking of witchcraft, I have some very, very, very, very, almost unbearably exciting news to impart, but I can’t blog about it until Monday when it’s officially announced.]

La Val’s is a cool place to see a show. The “subterranean” part of the title means that it’s underneath a pizza parlor, and during key moments of the show it adds some levity to hear that someone’s mushroom and sausage pie is ready. In fact, when Hamlet succumbed to the poisoned sword tip, someone upstairs dropped a pool ball… and somehow it seemed appropriate.