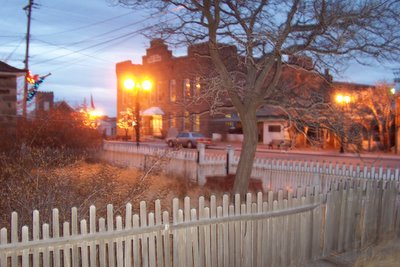 Rather than spending Christmas with the Ghost of Christmas Past, we spent it with the ghosts of dead miners. To wit, we hit a ghost town. 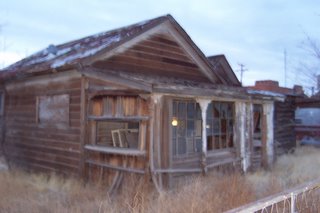 nation had been Calico, California (destination being a loose term meaning “we saw a sign as we drove past and resolved to return”), but after some advice given to us on Christmas night (see the Unhappy Hellidays post), we decided to bag Calico, which had been described as Disneyized, and instead head to Goldfield, Nevada, a REAL ghost town.

Our Delusional Adviser described the riches of Goldfield with such vigor that I grabbed a scrap of paper to make notes (and hence have evidence now of the pure delusion of his advice). Goldfield, he said, was a boom town that had been abandoned and there were lots of buildings still around, included a haunted hotel that, if you talked to the guys at the saloon across the street, they might let you into. Moreover, Goldfield had just received its state historic designation a few weeks ago, so I thought, “Hm…. freelance story?”

I was in ecstasy. And since our Delusional Adviser told us Goldfield was only a few hours north of Las Vegas and that Reno was only a couple hours north of Goldfield, we decided to reroute our trip home to Oakland through Reno. This means that rather than going back through California, we would head north through Nevada, and then take a left turn at Reno to cut through the mountains. Sounds easy, right?

We arrived in Goldfield.

Now, to me, the main characteristic a ghost town must have is that it be abandoned. That only the GHOSTS live there, right? Hence the name?

Well, Goldfield has some live residents living there with real homes intermingled with the abandoned shacks. In fact, a cursory examination would say half the homes were being lived in, half not, and my friend Tamim said later, “That’s not a ghost town. That’s Flint, Michigan.” According to Webster’s 9th, a ghost town is “wholly or nearly deserted,” so I think my disappointment is valid.

The other criteria I have for ghost town, and I admit I’m wrong on this one (but can’t prevent my tender feelings nonetheless), is that it be from the 1800s. I need the wooden saloon with one of its doors hanging half-cocked blowing in the wind, and a moldering brothel. But Goldfield wasn’t established until 1902 and was “abandoned” around 1912, a little late for my taste. Instead of wood, we had brick.

We walked around Goldfield, trying to figure out what in this salvage yard was what. Everyone seems to have rusted metal objects on their lawns (side note. I just turned to ask Alan what kinds of things they had in their yards, and his nonjudgmental response was, “I can’t believe how many times you want to revisit how messy Goldfield was. Let people have whatever they want in their yards!”)

I am not the most fastidious housekeeper, but I do like things tidy. I would not randomly cast things aside in my yard to see how the weather treats them. I would not want it necessary to plan a tactical assault while walking through one’s yard, to avoid getting gashed by sharp, tetanus-ridden objets d’art. I had a brainstorm that I could come to Goldfield and offer an all-day conference on How to Get Organized.

In retrospect, I think that this messiness was a way of helping ease the eye’s transition from “1912 abandoned shack” to “home sweet home.”

Anyway, we went to the courthouse to see if we could get some help. There, we were “assisted” by a sheriff who did not want to offer information about Goldfield but instead wanted to talk about how a romance novel lists his name in the acknowledgments section. I nodded and smiled and very much appreciated looking at that acknowledgments page, meanwhile trying to crane around him to listen to the woman behind him. I heard her utter some tantalizing information about ghosts she could hear upstairs in the courthouse sometimes. I was impeccably polite but also trying to steer my sheriff with direct questions about the town. Finally, I had to give up and assume that Alan would remember everything the woman was telling him.

When I overheard her say there was a pamphlet outside with a walking tour of Goldfield, we used that as our exit. The light was fading and we wanted to take photographs for that hypothetical article I might write. We stepped outside and rifled through all their pamphlets – not a one about Goldfield. Shit. But I was damned if I was going to go back inside that office and risk more Harlequin talk. So we just wandered around, took some photos.

The haunted hotel did look kind of cool through the windows, but still too modern for the ghost town experience. And of course the saloon across the street had no one in it, with key or without.

I must make the confession that later when we returned home and googled Goldfield, we learned it had a pretty damn cool history. Wyatt Earp lived here after his O.K. Corral gunfight, and there was apparently a bar so long it took 80 bartenders to serve everyone… but we knew none of this. Our experience was underwhelming. Here’s a picture of me givin 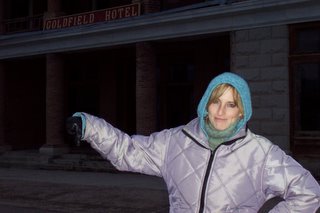 g a thumbs down (my black glove blends against the background). Did I mention it was freezing cold there, too?

So, we continued on to Reno. Delusional Adviser had told us to beware the speeding traps in these small communities, so I was vigilant during the parts I drove. I quickly decelerated from 70 to 50 to 40 to 30 in the three seconds they give you to do so in each of these little towns.

We got behind a swerving black sedan whose driver was clearly drunk. I slowed down and watched their lurching progress. Finally, they turned off onto another road and I accelerated back to the 40 mph which was the last sign I’d seen. Apparently, Drunky had distracted me so much I missed the 30 mph sign – and sure enough, I got a ticket.

Alan’s been in P.A. school and little paperworky things have been somewhat ignored. Things like making sure you have current insurance and registration in your car (I hasten to say both WERE current, but the proof was simply not in the car.) Adding to my $117 speeding ticket was $700-something for the proof of insurance. Our peace officer said “nine times out of ten,” when you show the court proof of insurance, that part will be dismissed. Well, great. Given my luck, I’ll be part of that ten percent solution.

The officer asked me my profession and I replied, “Instructor.” Later, I looked at the ticket and he had written “Constructor.” I don’t know if he thinks I helped build the Wynn or if I’m still active with my Legos, but I had to laugh. Snort, really.

We continued on, pissed. Since Delusional Adviser had been ludicrously off on his distances, we ended up having to stay in Reno instead of continuing on to Oakland, giving us the extra expense of another hotel night. Then the next day we were in scary Sierra weather going through Donner Pass (yes, exactly, where the wagon train people were stranded and had to eat each other).

Here’s the highlights of that portion of the trip.

We saw a sign that says chains are required even for cars with 4-wheel drive. In the past, we’ve always gone through the pass just with 4-wheel drive. I asked Alan if the chains were in the car, and he astutely replied, “Gosh, I didn’t think I’d need chains driving down California to the Nevada desert.” Thanks, Delusional Adviser!

So we sweated bullets thinking we were going to have to pay the $40 to have someone rent you chains, and then the $20 to remove them four miles down the road, but thankfully we were waved through. We passed the dozens of cars pulling off to put on their chains… and now we were like one of three people on the road. It was really scary. We began to wonder whether being waved through was a good thing or not! We were on ice and at one point when Alan tested his brakes we fishtailed. It was pretty harrowing.

Then all of a sudden all the Chain People began catching up, as well as other 4-Wheel Drives going recklessly fast thinking their tires were, I don’t know, magical. We passed no fewer than three serious accidents by the side of the road. It was like the scene in The Shining when Mr. Halloran is trying to rush back to the Overlook.

One accident – well, we think the driver is either dead or in a wheelchair. It was a pickup truck upside down, facing the wrong direction, the cab completely smushed in. There wasn’t really room for a person there anymore. And the cover for the truckbed had been sheared off. His/her personal belongings were strewn across the snow (passenger was already in ambulance somewhere). The sobering thing is that there was no other car there (besides the cop car). So, this driver got himself in a whole mess of trouble all by himself. Meaning he must have been speeding like a m-f-er. I just got so sad thinking, “Here’s someone who went up to Tahoe for a fun ski weekend and he’s just driving a little too fast on the way home… and it’s all over.”

Traffic was going 10 mph in 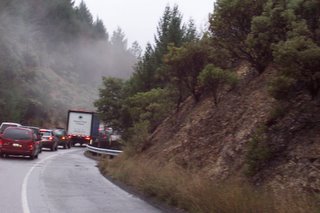 major portions, including when I took this picture. We were just steaming over Delusional Adviser, thinking “We would have been home yesterday if not for him.” After two hours of white-knuckle driving, we emerged out of the pass and continued on home.

Where Alan discovered he’d missed a credit card payment by one day, with the slap-ding of $35.

2. Due to the underestimation of travel time, we had to spend the night in Reno. $84 dollars extra.

6. Goldfield is not as exciting as it could’ve been. In spite of its purported Disney qualities, Calico might’ve been a better bet. And since it’s unlikely we will ever drive to Las Vegas again, I will probably never get to see Calico.

Not to mention the gas costs associated with the extra hours in the car.

My advice: do not listen to advice.

Is your mind spending to much time on Get organized? Do you sometimes wish life were simpler? It can be.