Music by the Lake 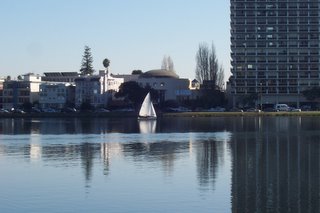 Just got back from walking around Lake Merritt. It rained on me; I put up my hood; the sun came out and dried us all up. Such are the moods of the lake.

[This is a stock archives photo of the lake, from a month or so ago]

As I walked, I listened to my mp3 player with the varied songlist (everything from Johnny Cash’s “I’ve Been Everywhere” to Gorillaz’ “Dare”). When the Bowie/Mercury song “Under Pressure” came on, I indulged in a little daydream about karaoking with David Bowie, singing all the Freddy Mercury parts. Of course, in this fantasy, David is so impressed that he insists we must go into the studio and record together.

My favorite musicians are:
1. David Bowie
2. Cake
3. The Pixies.

And here are my musings on those musicians.

Bowie: I first encountered him after a ninth grade lab partner Amy Carpenter made me a tape with Ziggy Stardust on one side and Duran Duran on the other. Soon I was a Bowieophile, trying to play his songs on my guitar (my guitar lessons had ceased after fifth grade when my instructor gave me a pedophilic vibe, but I still knew the major chords) and trying to find out everything about him. I would study his album covers over and over, trying to see if there was secret information I was missing.

In December 1989 (I think), I was in Ansbach, Germany with my then-boyfriend’s family. We learned David Bowie was performing in Stuttgart on the Sound + Vision tour, so we hopped a train and pulled into town to fulfill a dream. Our scalped ticket was so much money that we ran out of money for a hostel that night, and spent the entire night traversing Germany, sleeping on trains with our Interrail pass.

The concert? Freaking amazing. I loved the two-story projection screen, with the Gigantic David image reaching down to pluck at the tiny, real David on stage. It was spectacular, and since it was a greatest hits tour, it was the best thing possible for someone who had loved him so long.

I was distressed when he had his recent heart attack. My daydream (huh, it seems like I have a lot of Bowie daydreams, doesn’t it?) is that someday he will come stand on a little wooden platform in my backyard and perform for my birthday party. First, I need to get a backyard, and then I will think about approaching him.

My favorite songs: Sound + Vision (which I relate to as a writer), Rock and Roll Suicide,
Lady Stardust, Oh You Pretty Things (which I once ran a red light for, in high school, since I was so involved in listening to it. I only knew about this potentially-fatal mistake from all the cars honking after the fact), Drive In Saturday, Time, Fantastic Voyage, Ashes to Ashes, Boys Keep Swinging, John I’m Only Dancing, Life on Mars, Memory of a Free Festival (well, just the end part, where the orgasmic Sun Machine is Coming Down), Queen Bitch, Sweet Head, Velvet Goldmine, We are the Dead (if you’ve noticed the list suddenly got alphabetical, it’s because I consulted the excellent teenagewildlife website), and oh just scads of others.

What I like most about Bowie is that he’s so emotional. So many times his voice cracks or he surges up into falsetto to say what has to be said (as in “Ain’t there one damn song that can make me… BREAK DOWN AND CRY?”). He’s always fervent, caught up in his own moment… entirely earnest. God love ya, Mr. Bowie.

2. Cake. Absolutely, without question, the best band to run the lake with. Meaning somehow their rhythms fit with my footfalls. They also tend to be our Road Trip accompanists since Alan loves them too. Alan once remarked that they sound as if they broke into their third grade music room and stole all the instruments: the Jew’s harp, the wooden block, the triangle…

I have not seen them live but thanks to watching a Direct TV Freeview concert, I was able to identify the lead singer walking around our very lake one day, and some of the other band members at the Parkway Theater and at some local club watching the Lovemakers.

What I like about them is their exuberance paired with their world-weariness. A nice paradoxical mixture. And some brilliant lyrics: my current favorite is from “Dime,” the first-person tell-all from a coin: “I am determined not to be dented/By a car or by a plane or anything not yet invented.”

3. Pixies. What a solid rush of relief that they got back together. They’re an inspired band whose songs are unpredictable, taking left turns in the middle of the melody. It has not escaped my attention that my number one hero David Bowie chose to cover one of their songs, Debaser! The highs are high with this band, and the lows are misery-soaked as they should be.

I used to usher at the Warfield in San Francisco and got to see the Pixies twice in the ‘90s before their breakup, and then I saw them at the Greek Theater last year after they reunited (and it feels so good). I’ve also seen Frank solo at the tiny Star & Plough in Berkeley, the Breeders at Slim’s, the Martinis somewhere in SF, the Amps… wait, did I see the Amps? Actually, I think I saw the Amps at Slim’s and the Breeders never. They are all talented on their own or in different combinations, but they are ALL POWERFUL as the Pixies.

And now it occurs to me I have spent a lot of time thinking about music, when really I should have been doing other things. I got waylaid.

Tell me more about this Alan charachter. He sounds dreamy.