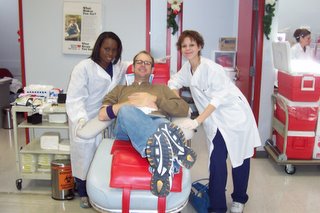 Yes, we all understand Christmas to be a time of blood-letting. Alan took it seriously this year. So did Penn and Teller, who, through the 13 Bloody Days of Christmas, let you have free tickets to see their Las Vegas show if you donate blood.

We had decided we needed to splurge this time and see a show (rather than just that free noontime Elvis impersonation show at the now-defunct Westward Ho, both of which rocked), and “splurging” for some means the course of blood through a vacuum-assisted line, rather than the opening of a wallet.
We drove out to the suburbs (yes, there is a Las Vegas Walmart) and checked into a clinic where the other six people ahead of Alan

on the sign-up sheet were also there for Penn and Teller tix.
Alan was doing great, despite his needle thing… up until the phlebotomist said, “Uh oh.” And then started calling out, “I need some help over here!” Alan started dizzying, and they had to throw some cold packs on him and dip his chair so his feet were above his head. I stood there and tried to assure him his lifeblood wasn’t being drained out of him… although of course it was.
The problem was a little bit of decaf he’d drunk that morning: did you know caffeine makes your veins seize up and close down? Scary to think.
Alan, who is a P.A. student, wanted me to say that the “elbow” in this post’s heading should really say, “antecubital.”
Anyway, this cool underage phlebotomist joked him out of his anxiety and we liked her and the other phlebotomist so much we just had to get their photographs with him. They said we can return in March and give blood for Le Reve tickets!
Fast forward a few hours…
We are in the Penn and Teller Theater in Rio, and we have been invited up 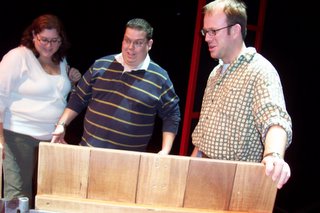 on stage along with everybody for box viewing. This is an opportunity to put your hands all over one of those disappearing boxes and check for the false bottom… here’s Alan checking.
Hint: if you go, check out the bass player who accompanies the box viewing. He’s not just any musician…
The show was just incredible, worth every penny--- uh, every drop, I guess. Those guys are brilliant. Here’s a picture of me in the audience before the show starts, read

y for all the spicy magic.
Afterwards, Alan told Penn in the lobby that he liked his NPR piece, which Penn responded had been important to him. I showed Penn, in the viewer of my digital camera, the image of Alan flat on the phlebotomist’s chair s

o we could see the show, and he laughed.
Next time: the ghost town of Goldfield
Posted by Erika M at Wednesday, January 04, 2006