While at the Lizzie Borden Bed & Breakfast, I spied a doll in a glass case behind the cash register in the gift shop. Turns out it was a Frozen Charlotte doll that had been found in a privy excavation along with other shattered bits of crockery and bottles. An employee kindly took it off the wall so I could look at it more closely. Conjecture of course has it as Lizzie Borden's doll since she was the only child living there around the time the dolls were manufactured (1850-1920 or thereabouts).

Lizzie was born in 1860 and moved to the Second Street house in 1872 when she was 12. Is it possible the doll was given her when she was younger, moved with her to the house, and was discarded in the privy after the arms and one leg were broken? It is entirely possible Lizzie (or even her sister Emma) kept the doll well past the age one would play with a doll, because of its sentimental value. It may have been a gift from their birth mother Sarah Morse. Sarah died when Lizzie was 3 and Emma 12. In that circumstance, however, you would think you would keep the doll even in its broken state. It's hard to know what the story behind this enigmatic piece is.

A quick bit of online research reveals that the bisque dolls were called Frozen Charlottes because they were frozen in one piece, without moveable limbs. No fun to dress them! Apparently they became allied with a sad poem and then ballad from the era, "A Corpse Going to a Ball," by Seba Smith. Among other things, Smith coined the word "scrumptious" and wrote the terrible saying, "There's more than one way to skin a cat."

No surprise, then, that he wrote a poem based on the true 1840 story of a young woman riding to a New Year's Eve ball in an open sleigh, who didn't want to cover her beautiful dress. At first Charlotte complains to her husband about the cold, then later she talks of growing warmer. After ten miles of shivering, she died of hypothermia.

Here's a few stanzas from the poem:

...Her bonnet and her gloves were on,
she stepped into the sleigh,
Rode swiftly down the mountainside
and o'er the hills away;
With muffled face and silent lips,
five miles at length were passed,
When Charles with few and shivering words,
the silence broke at last.

"Such a dreadful night I never saw,
the reins I scarce can hold."
Fair Charlotte shivering faintly said,
"I am exceeding cold."
He cracked his whip, he urged his steed
much faster than before,
And thus five other dreary miles
in silence were passed o'er.

Said Charles, "How fast the shivering ice
is gathering on my brow."
And Charlotte still more faintly said,
"I'm growing warmer now."
So on they rode through frosty air
and glittering cold starlight,
Until at last the village lamps
and the ballroom came in sight...

What a great toy for a kid! A woman frozen for her vanity.


Kind of a new twist on "Stopping by Woods on a Snowy Evening."

You can still purchase these dolls on ebay or maybe find some buried in your backyard. One more fun element about the dolls; some of them have unglazed backs so that they can float in the bathtub. Apparently people sometimes baked the smaller ones into cakes. Yum, tasty corpse in my red velvet slice! And, true to Victorian sensibilities, some came with their own coffin. 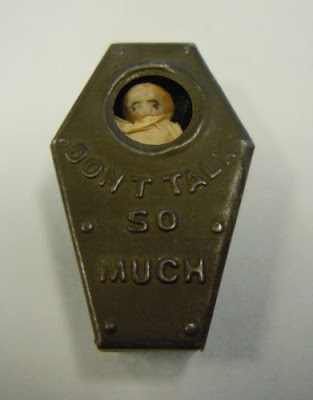 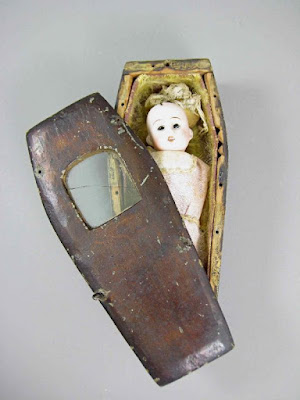