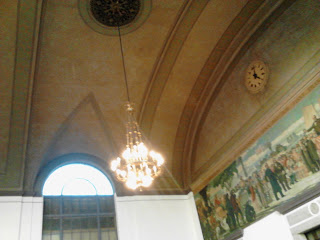 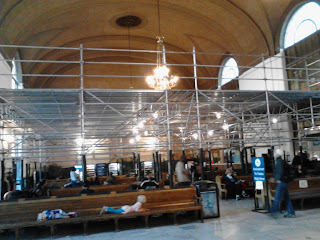 This weekend I picked up an old friend at the train station in Sacramento, David Nicolai. He now lives in China and was visiting for a few days before returning back.

I made a point of parking so that I could go inside the train station and wait for him...and I was rewarded by the sight of a vaulted ceiling and what was once a very grand station indeed. It needs some work--and that scaffolding looks like it's been there a while. But I could see past all that to something beautiful that just needs a little rehab work. 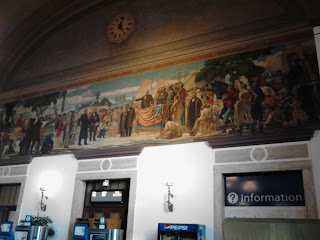 There was also a fantastic mural depicting the arrival of the first transcontinental train. I asked David if George Pardee (Oakland mayor and Calfornia governor) would have been in the picture, and he scoffed and said no, far too early. And maybe even too early for Enoch Pardee, George's father and also an Oakland mayor. More on my adventures with David soon.