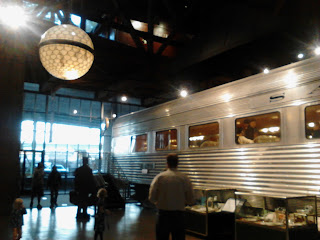 Long before Thomas the Tank Engine entered my life, I experienced an attraction to the railroad. In high school I had a gorgeous Art Deco poster of a Wagons Lit poster on my wall, and I've always thought longingly of what it would be like to travel in the golden days of rail.

The Sacramento Railroad Museum shows amazing examples of cars, engines, and even....the element I most remember from my first trip a decade ago....the china and flatware used on various trains. An entire dining car is set for a meal with each seat showcasing the place setting of a different line throughout the U.S.

We visited again in December, and the car that is "dressed" for night, with windows blackened and occasional lights flashing, that rocks as if you are underway, was a real thrill for the younger set that accompanied me. In fact, I think we went through that train at least ten times. There's even a fellow (mannequin) sleeping in the lower bunk bed in the last car.

And right outside it, I noted a gorgeous dome lamp hanging from the ceiling: enormous, municipal and simply ravishing. And it turns out it is from the 16th Street station in Oakland, one of three chandeliers that once hung there. The station was damaged in the 1989 earthquake and I believe was recently restored and used in several movies as it is a truly grand example of a light, airy aesthetic station. 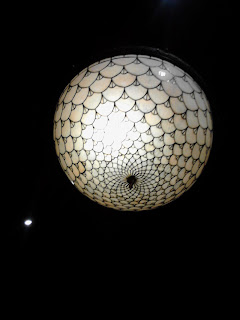 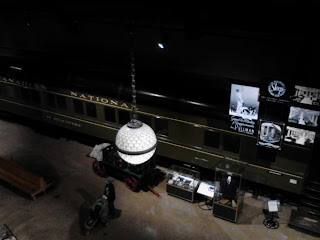 Although it's hard to tell in the photo, the lamp's glass looks like mother of pearl, and indeed a plaque at the museum notes that it was created at the Kokomo Opalesescent Glass Company in Indiana in the early 1900s. I love finding Oakland reminders, and this was a lovely one.

What a gem, Erika! Thank you for this post. Have you read Larry Tye's book about the Pullman Porters? I think you would appreciate it.

And next time you drive down to the museum let me know and I'll drive up to meet you. ;)

I remember when my son loved trains.

Oooh you'd meet me there, Kathy? Awesome. It's a date.

Linda: yes. Those industrious trains of Sodor, how I love them. We inherited your trains, remember? :) Percy is my fave.