How do witches fly? 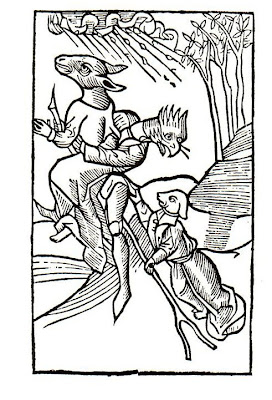 This was originally a guest post I wrote for fellow historical fiction writer C.W. Gortner's blog Historical Boys. Gortner's wonderful novel The Last Queen is being released in paperback tomorrow!

How do witches fly?

One of the prevailing characteristics of witches throughout time immemorial has been their ability to fly. Before broomsticks came into the picture, medieval imagery depicted witches flying on tree branches, as in this woodcut from De Lamiis, a pre-1500s tract written by German professor Ulrich Molitor to confirm the existence of witchcraft.

But how might a witch elevate herself? What provides the power that thickens the air and permits her to ride it?

We turn to the Malleus Maleficarum for the answer. The Malleus Maleficarum translates to “The Witch’s Hammer”—not the hammer a witch uses, but one that is used on her. This book, written in the 1480s, provides information on how to identify, question and punish witches, in essence a witch hunting Bible. Two German friars wrote it, based on their experiences roaming the countryside ridding it of witches. No less a personage than Pope Innocent VIII issued a papal bull complimenting these men on their hard work and providing an endorsement for them.

The book became a bestseller of its day, going through multiple editions over hundreds of years… and today, you can purchase a 1970s edition that is still in print. The Malleus purports to be legalistic and reasonable, even while it contradicts itself and provides flabbergastingly ridiculous examples of witchcraft. My edition provides nearly 300 pages of wince-worthy material… we would be laughing uproariously if hundreds of thousands hadn’t died because of its convictions.

So, the answer on how to fly. This comes from Part II, Question I, Chapter 3 (you can see that the very format of the book lends officiousness and dignity):

Now the following is their method of being transported. They take the unguent which, as we have said, they make at the devil’s instruction from the limbs of children, particularly of those whom they have killed before baptism, and anoint with it a chair or a broomstick; whereupon they are immediately carried up into the air, either by day or by night, and either visibly or, if they wish, invisibly; for the devil can conceal a body by the interposition of some other substance, as was shown in the First Part of the treatise where we spoke of the glamours and illusions caused by the devil. And although the devil for the most part performs this by means of this unguent, to the end that children should be deprived of the grace of baptism and of salvation, yet he often seems to affect the same transvection without its use. For at times he transports the witches on animals, which are not true animals but devils in that form; and sometimes even without any exterior help they are visibly carried solely by the operation of the devil’s power.

So there you have it: you must murder children before they can be baptized (saved), and create a potion from their limbs. Or with the devil’s help, you can dispense with the unguent and ride a devil in animal form, or just fly away solely.

The Malleus follows this information with a real-life example, to fortify its truth. The friars write of the town of Waldshut on the Rhine. Here lived a woman everyone hated so much that they didn’t invite her to a wedding that all the rest of the townsfolk attended. Indignant of the slight, she raised a hailstorm to ruin the festivities and prevent the guests from dancing.

Witches “usually” raise hailstorms by pouring water into a trench—since she had no water, she instead urinated into a little hole she dug and stirred it with her finger. A devil stood nearby, and when she was finished, he raised up the liquid and transformed it into the hailstones that fell on the celebrants.

[Quick tangent: how sad that she had no water. Was this indicative of the fact that she was a beggar and scorned for her inability to get food and drink for herself, to the extent that the town excluded her from the wedding celebration?]

As the woman re-entered the town, everyone who had been marveling at the hailstorm saw her and thought, “Aha!” Later, shepherds who had been tending their flocks and saw her urinate into the trench shared what they witnessed, and the witch was arrested.

She confessed to spoiling the wedding because she had not been invited. And they burned her at the stake.

What a frightening land and time to be a person that no one likes. Burned at the stake for the whims of weather, paired with guilt over not providing feast food for the one woman in town who was probably the most hungry.

As I wrote this guest post, I found myself wondering whether Waldshut really existed. Thanks to Wikipedia, I see that it is today amalgamated into the city of Waldshut-Tiengen.

And in the town, yes, still stands the Hexenturm ("Witches' Tower"), a round tower of the medieval fortified walls where witches once were jailed.

This story about the beggar woman drove me sobbing.