Abuse of child witches on the rise 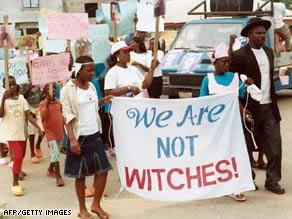 From today's CNN wire, the article "Abuse of Child 'Witches' on the Rise, Aid Groups Say" addresses the horrible plight of children stigmatized by the name witch. It follows in particular the story of 14-year-old Christian Eshiett of Nigeria, whose "rambunctious" ways led him to be repeatedly beaten, and to run away from home as a 12 year old, spending the next two years on the streets.

“Children accused of witchcraft are often incarcerated in churches for weeks on end and beaten, starved and tortured in order to extract a confession,” said Gary Foxcroft, program director of Stepping Stones Nigeria, a nonprofit that helps alleged witch children in the region.... The states of Akwa Ibom and Cross River have about 15,000 children branded as witches, and most of them end up abandoned and abused on the streets, he said.

Link here to Stepping Stones Nigeria, should you wish to donate.

Interestingly, Foxcroft feels the belief in witchcraft should be permitted to remain. I strongly disagree. As long as anyone believes another person wields supernatural powers, especially demonically-endowed powers, there is danger.

This is a very sticky issue for Africa and other parts of the world: Westerners don't wish to insist that such beliefs are superstititious or primitive. Medieval Europe found a way to extricate itself from such egregious beliefs (without the interference of colonializing forces). I honestly think the key is for economic conditions to improve. Crime rises when people are desperate--and accusing someone of witchcraft is a crime.

I don't support the belief in witchcraft. However, perhaps Foxcroft feels his best bet is to improve the system from within, allowing the belief to remain while removing children from its target:

“It is not the belief in witchcraft that we are concerned about,” Foxcroft said. “We acknowledge people’s right to hold this belief on the condition that this does not lead to child abuse.”

What do you think? I welcome comments--is the belief in witchcraft harmful in itself, or a benign belief system?

The image accompanied the article on CNN, with the caption "Children branded as witches protest on February 26, 2009, in the southern Nigerian city of Eket."

I think there are some positive aspects to witchcraft beliefs - most significantly, natural medicine. The supernatural element is always going to be troublesome, but then many mainstream religions are based on miracles etc.